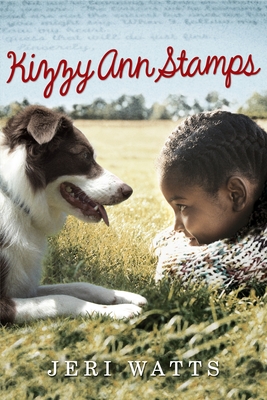 Taking things in stride is not easy for Kizzy Ann, but with her border collie, Shag, stalwart at her side, she sets out to live a life as sweet as syrup on cornbread.

In 1963, as Kizzy Ann prepares for her first year at an integrated school, she worries about the color of her skin, the scar running from the corner of her right eye to the tip of her smile, and whether anyone at the white school will like her. She writes letters to her new teacher in a clear, insistent voice, stating her troubles and asking questions with startling honesty. The new teacher is supportive, but not everyone feels the same, so there is a lot to write about. Her brother, James, is having a far less positive school experience than she is, and the annoying white neighbor boy won’t leave her alone. But Shag, her border collie, is her refuge. Even so, opportunity clashes with obstacle. Kizzy Ann knows she and Shag could compete well in the dog trials, but will she be able to enter? From Jeri Watts comes an inspiring middle-grade novel about opening your mind to the troubles and scars we all must bear — and facing life with hope and trust.

Hurray for Kizzy Ann! This funny, no-bow, dirt-on-her-hands, dog-with-her girl will lead you through her unforgettable experience as one of the first black students at the integrated school in her Virginia town. Combining humor, modern history, and heart, Jeri Watts has created a lovely novel that is gentle, honest, and full of hope.
—Meg Medina, Ezra Jack Keats Award-winning author

KIZZY ANN STAMPS is a tender and captivating story set in rural Virginia in the early 1960s that speaks of courage, friendship, and the pursuit of one’s dream. I wept good and grateful tears throughout. Thank you, Jeri Watts.
—Gigi Amateau, author of "Come August, Come Freedom"

Through epistolary fiction, Jeri Watts conjures a reluctant yet headstrong heroine who has been scarred by racism. With her devoted dog, Shag, Kizzy Ann navigates the color line, confronts her nemesis, and conquers her own doubts. This child’s-eye view of 1960s school desegregation resonates with warmth and humanity.
—Carole Boston Weatherford, author of the NAACP Image Award winner "Moses: When Harriet Tubman Led Her People to Freedom"

This is a touching story with a sharp and insightful protagonist. One hopes that it will find its way into the hands of feisty girls looking for a strong role model.
—School Library Journal

Watts offers an evenhanded, insightful evocation of a turbulent time and of a girl’s perseverance, with Kizzy’s writing exposing both widespread prejudice and the determination and will that countered it.
—Publishers Weekly

Through Kizzy Ann’s letters to her teacher (from July 1963 to May 1964), Watts weaves a powerful story of strength and self-acceptance in the face of injustice... The vivid historical setting of this short and satisfying read will leave readers feeling they have experienced life in Kizzy Ann’s world.
—Kirkus Reviews

The novel is particularly strong at demonstrating how complicated the start of integration was for young people; while the schools were officially integrated, there were huge divides among the students, and tremendous inequality continued to permeate their school experience. The omnipresence of racism is also vividly depicted.
—Bulletin of the Center for Children's Books

In her first offering for middle school, Watts has written a compelling tale that will educate young readers about this period of American history.
—Library Media Connection

A story full of adventure and laughs for anyone who has ever had to face down tough times.
—Discovery Girls

Jeri Watts has worked as a public school teacher for twenty-seven years. She has written numerous short stories as well as the picture book Keepers. Kizzy Ann Stamps is her first middle-grade novel. Jeri Watts lives in Virginia, where she is a professor at Lynchburg College.
Loading...
or
Not Currently Available for Direct Purchase