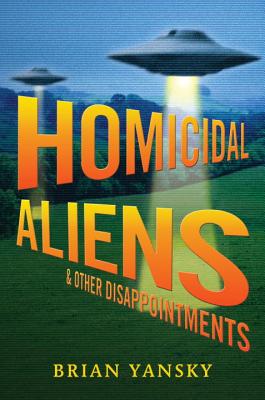 Homicidal Aliens and Other Disappointments

The reluctant hero from Alien Invasion and Other Inconveniences is back in all his droll glory — and this time the fate of humankind is on the line.

Jesse has had the worst year of his life. First a race of homicidal (but very polite) aliens invaded Earth, killing pretty much everyone and enslaving the few people left behind, including Jesse; his best friend, Michael; his sort-of girlfriend, Lauren; and the girl of his dreams, Catlin. Now Jesse is revered as some sort of Chosen One all because he managed to kill one of the alien lords and escape — even though he’s not really sure how he did it. But it’s hard to argue with the multitude of new talents he is developing, including (somehow) killing aliens with his mind and grasping glimpses of alternate futures. With thousands of aliens already on Earth and thirty million more about to arrive, Jesse has to decide whether to embrace his maybe-destiny before the world is completely destroyed. No pressure.

Praise For Homicidal Aliens and Other Disappointments…

Yansky blends humor with likeable and convincing characters that will have readers rooting for them.
—VOYA

Fans of the first book are a natural audience for the book, but thanks to the graceful insertion of back story in the form of a recapping prologue, this second act will attract and satisfy new readers.
—Kirkus Reviews

Fans of the first book will enjoy Jesse’s sense of humor and the interplay between his normal problems (which girl to date, for example) and the high-stakes pursuit of survival.
—School Library Journal

Brian Yansky is the author of many other young adult novels, including Alien Invasion and Other Inconveniences, My Road Trip to the Pretty Girl Capital of the World, and Wonders of the World. Brian Yansky holds an MFA in writing from Vermont College and is an assistant professor at Austin Community College. He lives in Austin, Texas.
Loading...
or
Not Currently Available for Direct Purchase