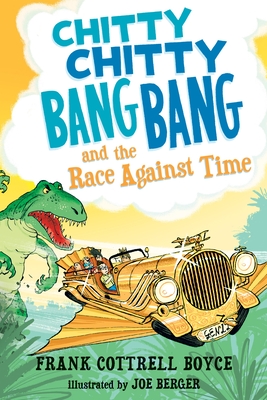 Chitty Chitty Bang Bang and the Race Against Time

Everyone’s favorite flying car shifts into another dimension as the intrepid Tooting family zooms back and forth through time.

When the Tootings return to Zobrowski Terrace at the end of Chitty Chitty Bang Bang Flies Again, they find that “home” is looking a lot like Jurassic Park. But this is no theme park — a very real and very hungry T. rex is charging them! Thanks to Dad’s inadvertent yanking of Chitty’s “Chronojuster” lever, the spirited car has ushered them back to prehistoric times, where the family (and especially Baby Harry) make a narrow escape. But Chitty has a mind of her own, and the Tootings will get an unexpected tour of exciting times and places from Prohibition-era New York (where Chitty wants to compete in the famous Prix d’Esmerelda’s Birthday Cake race) to the lost city of El Dorado and back again, with misadventures and surprise stowaways along the way. Get ready for a hilarious high-flying adventure, with celebrated author Frank Cottrell Boyce behind the wheel.

Praise For Chitty Chitty Bang Bang and the Race Against Time…

This second authorized sequel sends the reconstructed car with a mind of its own careening from the Cretaceous to the Jazz Age, Venezuela to the Wild West, while folding in references and tributes to Ian Fleming’s classic tale.
—Kirkus Reviews

Featuring a near-dizzying array of characters—including a reunion with suave first Chitty owner Mr. Zborowski—and events, from car races to kidnapping to run-ins with anacondas, this is a lively, entertaining read that those familiar with the previous title will especially enjoy. Digitally rendered, cartoonish illustrations add retro flair.
—Booklist Online

Frank Cottrell Boyce preserves the charm of the original while delivering a madcap escapade that a new generation of youngsters will love.
—BookPage Children's Corner

Boys in particular will appreciate the race’s death-defying moments and the continued mad-cap escapades, chases, kidnappings and narrow escapes.
—BookPage

Life with the Tootings is the wildest Sunday drive imaginable.
—Publishers Weekly

Joe Berger is an editorial cartoonist, animator, and illustrator. He has illustrated numerous books, including the Nosy Crow title Hubble Bubble, Granny Trouble by Tracey Corderoy. Joe Berger lives in England.
Loading...
or
Not Currently Available for Direct Purchase