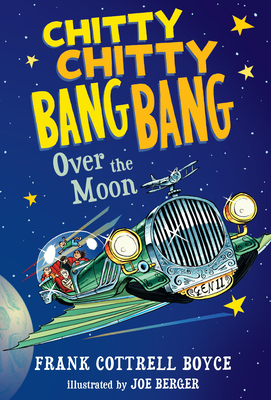 The Tootings are stuck in 1966! Somebody’s stolen Chitty Chitty Bang Bang and left them behind. But that’s not their biggest problem. Their biggest problem is that Little Harry’s been kidnapped by whoever stole their magical car. There’s only one solution: the Tootings must find the Potts — the family that originally built Chitty. Sharing their combined knowledge of how Chitty works, the families may stand a chance of rescuing Little Harry and finding the most brilliant car in the world. But a fiendish criminal has different plans, ones that involve flying Chitty Chitty Bang Bang to the moon and putting an explosive scheme into action.

Praise For Chitty Chitty Bang Bang Over the Moon…

As he did with the rest of the series, Boyce keeps up a zippy pace and provides a fantastic, adventure-filled plot, taking the Tootings and Potts from the North Pole to the moon. But after all the dizzying action, he ends the series thoughtfully and happily, while still leaving a glimmer of a chance for more Chitty stories in the future.
—Booklist Online

Readers will be breathless as they follow the zany action to its conclusion. Black-and-white illustrations nicely augment the adventures and characters and the pacing is breakneck.
—School Library Journal

Let's face it, who doesn't love Chitty? This book is great for boys and girls alike. It is full of adventure and surprises.
—Newsday

Frank Cottrell Boyce is a writer of books for young readers, most notably Millions, winner of the Carnegie Medal, Cosmic, which garnered six starred reviews, and The Unforgotten Coat. He lives in England.

Joe Berger is an editorial cartoonist, animator, and illustrator. He has illustrated numerous books, including Hubble Bubble, Granny Trouble and Whiz! Pop! Granny, Stop! by Tracey Corderoy. Joe Berger lives in England.
Loading...
or
Not Currently Available for Direct Purchase