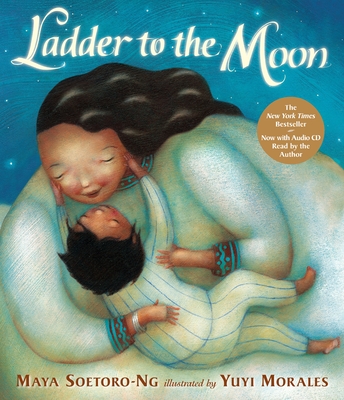 Ladder to the Moon with CD

"A lush, haunting story. . . . Soetoro-Ng, sister of Barack Obama, has written this story of compassion as a tribute to their mother." — Booklist (starred review)

Little Suhaila wishes she could have known her grandma, who would wrap her arms around the whole world if she could, Mama says. And one night, Suhaila gets her wish when a golden ladder appears at her window, and Grandma Annie invites the girl to come along with her on a magical journey. In a rich and deeply personal narrative, Maya Soetoro-Ng draws inspiration from her mother’s love for family, her empathy for others, and her ethic of service to imagine this remarkable meeting. Evoking fantasy and folklore, the story touches on events that have affected people across the world in our time and reaffirms our common humanity. Yuyi Morales’s breathtaking artwork illuminates the dreamlike tale, reminding us that loved ones lost are always with us, and that sometimes we need only look at the moon and remember.

Maya Soetoro-Ng was born in Jakarta, Indonesia, and is a writer and educator with a PhD in international comparative education. She says Ladder to the Moon, her first picture book, was inspired by her young daughter Suhaila's questions about her grandmother Ann Dunham, the mother of Maya and of our forty-fourth president, Barack Obama.

Yuyi Morales is the illustrator of Kathleen Krull's Harvesting Hope: The Story of Cesar Chavez, whose accolades include a Pura Belpré Award and a Christopher Medal, as well as the Pura Belpré Award-winning Los Gatos Black on Halloween by Marisa Montes. Born and raised in Mexico, she now lives in northern California.
Loading...
or
Not Currently Available for Direct Purchase