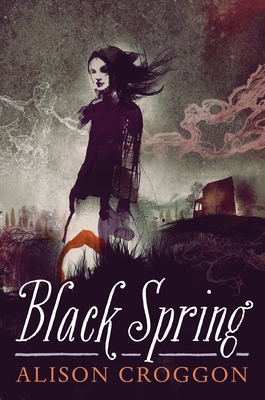 Inspired by the gothic classic Wuthering Heights, this stunning fantasy from the author of the Books of Pellinor is a fiercely romantic tale of betrayal and vengeance.

In a savage land sustained by wizardry and ruled by vendetta, Lina is the enchanting but willful daughter of a village lord. She and her childhood companion, Damek, have grown up privileged and spoiled, and they’re devoted to each other to the point of obsession. But Lina’s violet eyes betray her for a witch, and witches are not tolerated in a brutally patriarchal society. Her rank protects her from persecution, but it cannot protect her from tragedy and heartbreak. An innocent visitor stands witness to the devastation that ensues as destructive longing unleashes Lina’s wrath, and with it her forbidden power. Whether drawn by the romantic, the magical, or the gothic, readers will be irresistibly compelled by the passion of this tragic tale.

In language and pitch, the pastiche is spot on... Devotees of Brontë’s original work will still enjoy Croggon’s amplification of the story’s supernatural elements.
—Publishers Weekly

Beautifully written, emotionally intense, lots to think about and entirely deserving of its beautiful cover.
—KirkusReviews.com

An atmosphere dripping with gothic touches and a darkly captivating tale of heartbreaking, destructive passion. ... Readers unfamiliar with Wuthering Heights will stick around for Lina’s obsessive and doomed romance with Damek, but fans of Brontë’s classic will delight in the clever echoes of the original.
—Booklist

More than a story told in the style of Emily Bronte, this is a retelling of Wuthering Heights in a fictional land that hates witches and relies on wizards, vendettas, and blood money to keep its royal family in power. ... As a comparison novel for Wuthering Heights, this book would be a valuable addition for the high school library.
—Library Media Connection

The insistent power of the Gothic is on full display here, with the added dimension of the kinds of magic that appeal to contemporary teen readers. The language is challenging in the best sense, echoing the prose of its source text. ... [T]he world is compellingly made and fully immersive, and readers will be as attracted and repulsed by Lina and Damek as they have been for nearly two centuries by Catherine and Heathcliff.
—Bulletin of the Center for Children's Books

[A] romantic and magical tale with a gothic flair.
—School Library Journal

Goths of every era have found romance in darkness, and Croggon is no exception.
—The LA Times

Alison Croggon is the acclaimed author of the Books of Pellinor and an award-winning Australian poet and playwright. About Black Spring, she says, “This book is my love letter to Emily Brontë, whom I've adored since I was a child. I was especially inspired by the free spirit and passionate music of her poems.” Alison Croggon lives in Melbourne, Australia.
Loading...
or
Not Currently Available for Direct Purchase