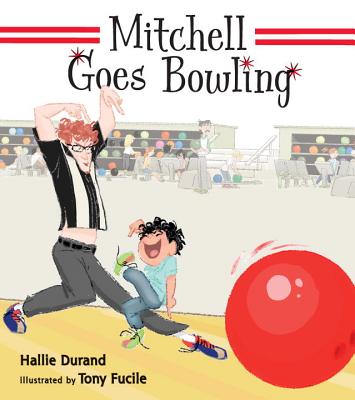 Battle on! Head to the lanes for another hilarious, high-energy story as four-year-old Mitchell and his obliging dad strike a winning deal.

Mitchell liked to knock things down.
That’s just how he rolled.

One Saturday, when Mitchell almost knocks down his dad, his dad catches him and puts him in the car. And when they step into the bowling alley, Mitchell feels right at home. Pizza! Giant crashing noises! Special shoes! But as Mitchell picks up the biggest ball and quickly learns the word gutter, and when Dad does a little kick with his leg and earns a big X on the scoreboard, Mitchell starts to get peevish. How can Mitchell get a chance to do a steamin’-hot-potato-dance too? With wit, warmth, and comedic charm, Hallie Durand and Tony Fucile roll another strike with this tale of a lovably rambunctious child and his doting dad.

Durand and Fucile are a winning combination, and their father/son bonding will leave readers in stitches. Loads of fun with a lot of heart.
—Kirkus Reviews (starred review)

Fucile’s exuberant illustrations pop on every page and the ratio of word to illustration is very balanced. The story is played for laughs, but, in the process, readers will enjoy the father/son relationship and subtlely learning about being a sport.
—School Library Journal

[A]n irresistible picture book about a high-energy kid's outing with his super-competitive dad. It's hard to say which of Tony Fucile's illustrations jumps off the page more: the high-five on "Battle on!" or the celebratory "triple steamin'-hot-potato dance, with salsa."
—Newsday

Hallie Durand is the author of Mitchell Goes Driving, among other books for children. She lives in Maplewood, New Jersey.

Tony Fucile is the author-illustrator of Let’s Do Nothing! as well as the illustrator of the Bink & Gollie series by Kate DiCamillo and Alison McGhee. He has spent more than twenty years designing and animating characters for numerous feature films, including The Lion King, Finding Nemo, and The Incredibles. He lives in the San Francisco Bay area.
Loading...
or support indie stores by buying on