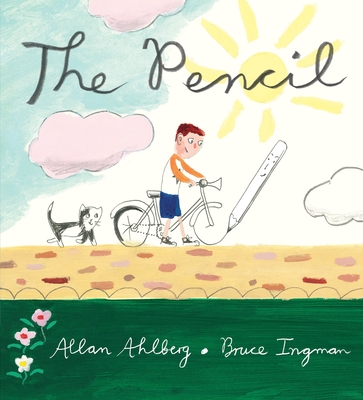 Once a pencil draws a little boy, there’s no telling what will come next — a dog, a cat, a chase (of course), and a paintbrush to color in an ever-expanding group of family and friends. But it’s not long before the complaints begin — "This hat looks silly!" "My ears are too big!" — until the poor pencil has no choice but to draw . . . an eraser. Oh, no! In the hands of Allan Ahlberg and Bruce Ingman, creators of The Runaway Dinner and Previously, can anything but havoc and hilarity ensue?

Praise For The Pencil…

There are deep resonances here of world creation myths and the power of artistic expression… free-wheeling faux-childlike illustrations … a thought-provoking model of conflict resolution. But really, this wry, madcap, loving story is for everyone who thinks that of course a boiled egg should be called Billy or who wants to hear the tale repeatedly so as to shout "OUT!" louder each time.
—The Horn Book (starred review)

Ahlberg’s matter-of-fact, curiously specific storytelling has a weirdly appealing blend of absurdity and homey charm.
—The Bulletin of the Center for Children’s Books

The Pencil is wildly inventive, deliciously high-concept and simmering with dramatic tension. (Who could have imagined sweat beads flying off a nervous pencil would be so believable?)
—San Francisco Chronicle online

Both clever and suspenseful, this surefire delight tells the story of a pencil who must deal with the consequences of his inventions…The book’s comical unexpected plot and wry narrator keep the story fresh throughout.
—San Francisco Examiner

A definite winner from the team that created The Runaway Dinner. The combination of humorous text, quirky drawn out writing style, and clever illustrations all point to another runaway hit!
—For Immediate Release Reviews…Kids

ALL of the characters in this book get names — even the ants. And it’s a GEM of a read-aloud!
—Shelftalker (PW blog)

Allan Ahlberg is the acclaimed author of numerous picture books, including PREVIOUSLYand THE RUNAWAY DINNER. His other books include THE SHOPPING EXPEDITION and THE BABY IN THE HAT, both illustrated by André Amstutz, and the popular Jolly Postman series. He lives in Bath, England.

Bruce Ingman is the award-winning illustrator of PREVIOUSLY and THE RUNAWAY DINNER, as well as BOING! by Sean Taylor. He lives in London.
Loading...
or support indie stores by buying on