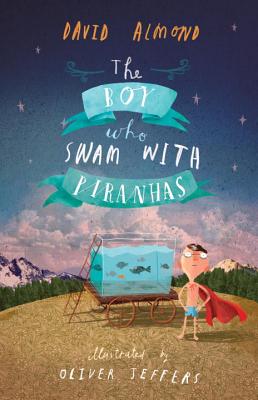 The Boy Who Swam with Piranhas (Hardcover)

A boy escapes home to seek his own way in the world in a whimsical outing by the award-winning David Almond, illustrated by Oliver Jeffers.

Stanley Potts’s uncle Ernie has developed an over-the-top fascination with canning fish in the house, and life at 69 Fish Quay Lane has turned barmy. But there’s darkness in the madness, and when Uncle Ernie’s obsession takes an unexpectedly cruel turn, Stan has no choice but to leave. As he journeys away from the life he’s always known, he mingles with a carnival full of eccentric characters and meets the legendary Pancho Pirelli, the man who swims in a tank full of perilous piranhas. Will Stan be bold enough to dive in the churning waters himself and choose his own destiny?

David Almond is the winner of the 2010 Hans Christian Andersen Award, the most prestigious award in international children’s literature. He is known worldwide as the multi-award-winning author of Skellig, Clay, and many other novels, stories, and plays. With Candlewick, he is the author of My Dad’s a Birdman and The Boy Who Climbed Into the Moon, both illustrated by Polly Dunbar, as well as The Savage, Slog’s Dad, and Mouse Bird Snake Wolf, all illustrated by Dave McKean. David Almond lives in England.

Oliver Jeffers is the author-illustrator of The Incredible Book Eating Boy, which was named a Bisto Book of the Year Honor book, as well as Lost and Found, the recipient of a Nestlé Children’s Book Prize Gold Medal, among several other picture books. He was born in Australia, grew up in Northern Ireland, and now lives in New York City.

Praise For The Boy Who Swam with Piranhas…

Dahl meets J. K., flavored with a soupçon of Choose Your Own Adventure, but in the end, this novel is all pure, sweet Almond. ... In the subtlest ways possible, Almond masterfully makes young readers understand this, and they will be delighted that life lessons can be administered so deliciously.
—Booklist (starred review)

Readers who have read Almond’s other books will be entertained by the decisions Stan makes, especially when he leaves home, as many youngsters fantasize about that.
—Library Media Connection

This has some of the fantasy quality of a Roald Dahl novel but without the dark heart that lies at the core of many of Dahl’s works. Almond’s narrative is both quirky and dreamlike, and the kindness of many of the characters propels it forward with positive energy. The present-tense narration is sometimes lyrical, sometimes straightforward or confiding, and the combination of these styles is surprisingly effective. Almond has a deft touch with the moonlight and mysticism, allowing readers to linger a bit in the mystery but at the same time unspooling the tale’s trajectory purposefully and thoughtfully. Jeffers’ frequent and slightly offbeat monochromatic illustrations are well matched to Almond’s whimsical text. ... [A] real catch.
—Bulletin of the Center for Children's Books

Master storyteller Almond combines delicious wordplay, zany antics, wacky characters, and a bit of magical realism in a novel that touches the heart. Quick-paced, accessible, and enhanced by stylized cartoonlike drawings, this book is sure to be enjoyed by fans of humorous, quirky stories.
—School Library Journal

Almond ventures far afield from the almost hallucinatory magical realism that characterized his earliest work, offering up some lighthearted fare for a younger audience. This book, complete with old-fashioned intrusive narrator and numerous spot illustrations, seems to have more in common with the work of Roald Dahl or Frank Cottrell Boyce; yet the silliness is tempered by an unsentimental, clear-eyed wisdom, marking it unmistakably as the work of Almond.
—The Horn Book

With its quirky humor, fantastical plot and delightful illustrations by Oliver Jeffers, The Boy Who Swam with Piranhas is a perfect book for end-of-summer reading.
—BookPage

Roald Dahl fans take note: David Almond's The Boy Who Swam With Piranhas has all the makings of one of Dahl's classic coming-of-age tales.
—FamilyFun
or support indie stores by buying on
Copyright © 2020 American Booksellers Association