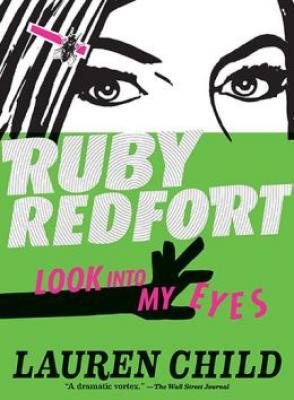 "Sardonic narration will grab readers from the get-go, and puzzles laced throughout will intrigue those who share Ruby’s passion for solving mysteries." — Publishers Weekly (starred review)

Everyone knows that Clarice Bean is exceptionordinarily keen on the Ruby Redfort books. Now in her own starring role, Ruby, a genius code-cracker and daring detective, along with her sidekick butler, Hitch, work for a secret crime-busting organization called Spectrum. Ruby gets into lots of scrapes with evil villains, but she’s always ice-cool in a crisis. Just take a classic screwball comedy, add heaps of breathtaking action, and multiply it by Lauren Child’s writing genius, and what have you got? Only the most exciting new middle-grade series since, like, ever.

A nice pastiche of the spy genre for younger readers.
—The New York Times

Smart, savvy, and cool, Ruby Redfort is a modern young heroine adept at holding her own in the adult world. Replete with codes, high-tech spy gadgets, outspoken T-shirts, and plenty of humor, LOOK INTO MY EYES is a fun, if often fantastical, mystery adventure romp with plenty of character and action and will appeal to male and female readers looking to keep their wits sharp while minding Ruby’s “Rule 1: You can never be completely sure what might happen next."
—VOYA

She is everything you want a pint-sized detective to be: smart, resourceful, and brave with a clever wisecrack ever at the ready. Mystery fans who have outgrown Clarice Bean will nonetheless join her in her admiration of this mashup of Nancy Drew and Encyclopedia Brown with twists and quirks that are all Ruby’s own.
—Bulletin of the Center for Children's Books

The mystery and intrigue, murder and mayhem are presented in a light tone and with a satirical touch sure to make readers laugh. Those familiar with the author’s “Clarice Bean” novels may note that Clarice’s favorite book character now has her own series.
—School Library Journal

Get ready, puzzle lovers! There’s a new book on the scene that will satisfy the sleuth in all of us. Author Lauren Child introduces Ruby Redfort, a young code-cracking genius who gets caught up in a great mystery.
—BookPage

Sarcastic and smart, Ruby makes a compelling heroine. RUBY REDFORT LOOK INTO MY EYES is a fast-paced adventure, and budding codebreakers can try cracking the ciphers alongside Ruby. Highly recommended for kids who like mysteries and adventures.
—Baltimore's Child

Lauren Child burst onto the children's book scene in 1999 and has since published many best-selling and award-winning books, including the hugely popular Charlie and Lola and Clarice Bean series. She has won numerous awards, including the prestigious Kate Greenaway Medal. Her books have been made into an award-winning TV series and have sold in many languages with runaway success. Lauren Child lives in London.
Loading...
or
Not Currently Available for Direct Purchase