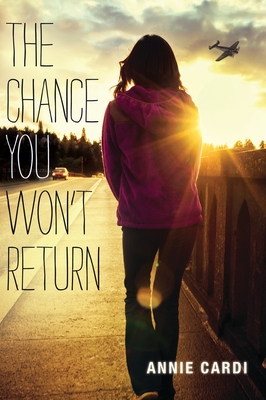 The Chance You Won't Return

When your mom thinks she’s Amelia Earhart, navigating high school, first love, and family secrets is like flying solo without a map.

Driver’s ed and a first crush should be what Alex Winchester is stressed out about in high school — and she is. But what’s really on her mind is her mother. Why is she dressing in Dad’s baggy khaki pants with a silk scarf around her neck? What is she planning when she pores over maps in the middle of the night? When did she stop being Mom and start being Amelia Earhart? Alex tries to keep her budding love life apart from the growing disaster at home as her mother sinks further into her delusions. But there are those nights, when everyone else is asleep, when it’s easier to confide in Amelia than it ever was to Mom. Now, as Amelia’s flight plans become more intense, Alex is increasingly worried that Amelia is planning her final flight — the flight from which she never returns. What could possibly be driving Mom’s delusions, and how far will they take her?

Praise For The Chance You Won't Return…

Cardi delves into issues of love, acceptance, loss and identity in her engaging debut novel. ... The author creates nuanced characters and presents them with their flaws and strengths intact, including a character with a mental disorder who never loses her humanity or becomes a caricature. ... [A] well-written, first-person narrative about negotiating life’s curve balls that has a realistic ending. An honest, uncompromising story.
—Kirkus Reviews (starred review)

[A] candid and multilayered debut... Alex's voice is caustic, honest, and studded with humor. Cardi weaves elegant metaphors and incisive dialogue throughout her chapters, concluding with a wrenching sentiment about the necessity of sometimes allowing a lost loved one to find her own way home.
—Publishers Weekly (starred review)

Character development through the rendering of small detail is strong here, particularly with respect to Alex’s younger siblings, Katy and Teddy, who emerge in realistic response to their mother’s withdrawal from their lives. The result is a solidly crafted family story that sensitively explores the ripple effects of the temporary brokenness of one member.
—Bulletin of the Center for Children's Books

The novel’s central theme is a clever, deft twist on the idea of leaving home. ... A novelist to watch.
—School Library Journal

Cardi presents a powerful look at family life and how it changes everything when you need to watch over your parent.
—VOYA

"The Chance You Won't Return" is a stunning debut novel featuring a profound exploration of family dynamics and the effects of mental illness. The story palpitates with a raw mix of emotions, including frustration and love, as Alex attempts to navigate a new world where her mother is no longer her mother. Cardi’s realistic treatment of the issues in this novel make for a poignant story that will stay with readers long after the final page is turned.
—TeenReads.com

Annie Cardi holds an MFA in creative writing from Emerson College. Her short stories have appeared in the Georgetown Review, Vestal Review, and other publications. In 2011, PEN New England selected her as a winner of the Susan P. Bloom Children’s Book Discovery Award for the manuscript that would become The Chance You Won’t Return, her debut novel. Annie Cardi lives near Boston with her husband and a portrait of a sea captain.
Loading...
or
Not Currently Available for Direct Purchase