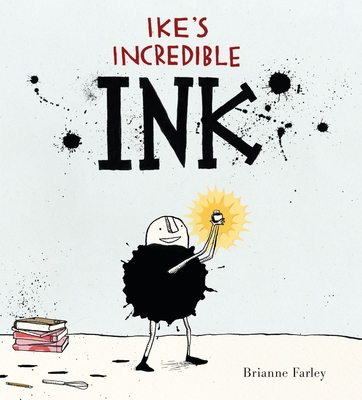 The journey is the important thing in this tale of a sympathetic — if temporarily distracted — artistic soul.

Ike wants to write a story, an incredible story. He’s all ready to go, but even after cleaning his room and calling his best friend, he somehow can’t seem to get started. And then Ike realizes what’s missing — he needs new ink. His very own ink, made from just the right ingredients. Now what can Ike find that is velvety, dark, and sneaky, just like ink? How far will he go to get it? In Brianne Farley’s whimsical debut picture book, freely illustrated in a fresh, bold collage style, Ike’s adventurous quest to find the perfect ink might just be the inspiration he needs to get started on his incredible story.

Farley is a genuine talent, playing with detail, scale, and texture like a seasoned pro, giving her images a sweet, eccentric, comic rhythm.
—Publishers Weekly

The long and winding—and funny and diverting—road to creative endeavor. ... A realistically comical look at artistic process disguised as merry procrastination.
—Kirkus Reviews

The art is striking and great fun to explore. Kids will be drawn to the quirky book.
—School Library Journal

[An] attractively rendered tale... The streamlined text reads aloud smoothly, it and is complemented by Farley’s crisp illustrations, rendered in ink and digital collage.
—Bulletin of the Center for Children's Books

Illustrations completely fill each page, and they are fun. Ike’s body may only be an inkblot, but his personality shines through.
—Library Media Connection

Farley does a masterful job exposing the beauty of imagination through this young character in her book for beginning readers. Each page boasts its own perceived texture and mood, and Farley does not wait for the page turn to show her hand. Farley’s debut picture book is full of high-contrast, stylized images; hopeful endeavors; and the elusive message that the journey is just as important (or more so) than the finish line. Ike’s Incredible Ink is playful, smart, and whimsical in design, much like creativity at a young age should be. Ike, like the book’s author, is daring, works against the grain, and is ready to turn a pressed pen into an infectiously fun inkblot.
—Booklist Online

More metafictional fun. … [A] good story within a story.
—The Atlantic Wire

Brianne Farley is a graduate of the Savannah College of Art and Design. Her freelance work has been selected by the Society of Illustrators of Los Angeles. And while her work has appeared in McSweeney’s, the New York Times, and elsewhere, Ike’s Incredible Ink is her first book. Brianne Farley lives in Traverse City, Michigan.
Loading...
or
Not Currently Available for Direct Purchase