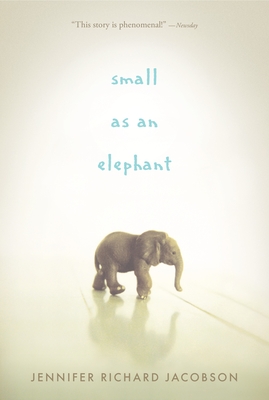 Small as an Elephant

“Over Labor Day weekend, 11-year-old Jack's mom takes him camping in Maine. When he wakes up that first morning and finds her gone along with the car and all their food, he knows he'll have to find his own way home. Jack's mother has always been unpredictable, but if she's 'spinning' she won't be making good decisions, and if he turns himself in, Social Services will probably make him live with his grandma. This is a great read about a young boy's determination to see things through to the end, and his realization that, although he was abandoned, he was never really alone.”
— Jamie Schildknecht, The Rediscovered Bookshop, Boise, ID
View the List

"A deeply perceptive look at the universal fear of abandonment." — Booklist (starred review)

Ever since Jack can remember, his mom has been unpredictable, sometimes loving and fun, other times caught in a whirlwind of energy and “spinning” wildly until it’s over. But now she is gone, leaving him all alone on a campsite in Maine. Can he find his way back to Boston before the authorities realize what happened? With nothing but a small toy elephant to keep him company, Jack begins a journey that will test his wits and his loyalties — and his trust that he may be part of a larger herd after all.

Praise For Small as an Elephant…

Jack comes to realize that he hadn’t been alone, that family and people he didn’t even know were there for him in a ‘makeshift herd.’ The happy yet realistic ending leaves Jack (and readers) ‘light-headed with hope.'
—Horn Book

Jennifer Richard Jacobson’s nuanced and heart-wrenching middle-grade novel, Small as an Elephant, gives a quiet force to one resilient boy and his mentally ill mother.
—Bookpage

A classic journey story, this is a very believable and exciting adventure with modern accoutrements.
—Library Media Connection

Jennifer Richard Jacobson is the author of several books for children and young adult readers, including the Andy Shane early chapter books, illustrated by Abby Carter. She lives in Cumberland, Maine.
Loading...
or support indie stores by buying on