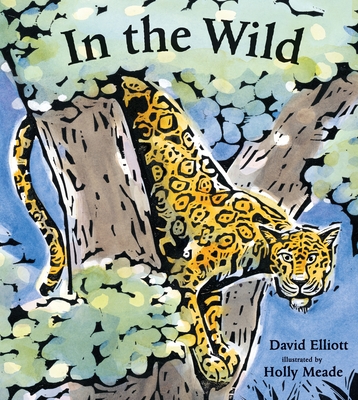 “A stunning combination of poems and illustrations celebrating some of Earth’s wildest and most beautiful creatures.” — Kirkus Reviews (starred review)

The stellar team who brought us On the Farm presents a companion book evoking creatures of the wild in simple, clever poems and vibrant woodcuts. From the lion standing alone on the African savannah to the panda in a bamboo forest, from the rhinoceros with its boot-like face to the Arctic polar bear disappearing in the snow, David Elliott’s pithy verse and Holly Meade’s stunning woodcut and watercolor illustrations reveal a world of remarkable beauty and wonder.

Praise For In the Wild…

A stunning combination of poems and illustrations celebrating some of Earth’s wildest and most beautiful creatures.
—Kirkus Reviews (starred review)

Meade’s woodblock prints, striking dark forms washed in watercolor, have just a hint of humor and capture the powerful wild nature of the creatures as well. The poems are read-aloud gems, and the book is versatile in both audience and potential uses.
—School Library Journal (starred review)

Meade also captures the scorched beauty of the African savanna and the intricacies of jungle foliage. Elliott’s short poems focus on what the illustrations cannot: animal movement (as when the lion shakes his mane) or sounds (as when the wolf howls)...Beautiful and thought-provoking.
—Booklist

[Elliott] has a marvelous imagination that, together with Holly Meade's woodcut-and-watercolor illustrations, gives us a truly fresh angle on the animal kingdom.
—Concord Monitor

At first you might think that the pictures by Holly Meade will be everything: the dark lines of the woodcuts making the various animals stand out vividly. But then you’ll start reading David Elliott’s remarkable poems….a memorable teaming of writer and illustrator.
—Baltimore Sun

David Elliott is the author of several books for young readers, including On the Farm, the acclaimed companion book to In the Wild; Finn Throws a Fit!, illustrated by Timothy Basil Ering; and the New York Times best-selling And Here’s to You!, illustrated by Randy Cecil. He lives in Warner, New Hampshire.

Holly Meade has illustrated many picture books, including On the Farm, as well as the Caldecott Medal-winning Hush! A Thai Lullaby and its follow-up, Peek! A Thai Hide-and-Seek, both by Minfong Ho. Holly Meade lives in Sedgwick Maine.
Loading...
or support indie stores by buying on