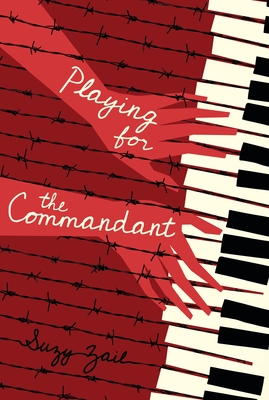 Playing for the Commandant

A young Jewish pianist at Auschwitz, desperate to save her family, is chosen to play at the camp commandant’s house. How could she know she would fall in love with the wrong boy?

“Look after each other . . . and get home safe. And when you do, tell everyone what you saw and what they did to us.”

These are Hanna’s father’s parting words to her and her sister when their family is separated at the gates of the Auschwitz-Birkenau concentration camp. Her father’s words — and a black C-sharp piano key hidden away in the folds of her dress — are all that she has left to remind her of life before. Before, Hanna was going to be a famous concert pianist. She was going to wear her yellow dress to a dance. And she was going to dance with a boy. But then the Nazis came. Now it is up to Hanna to do all she can to keep her mother and sister alive, even if that means playing piano for the commandant and his guests. Staying alive isn’t supposed to include falling in love with the commandant’s son. But Karl Jager is beautiful, and his aloofness belies a secret. And war makes you do dangerous things.

Praise For Playing for the Commandant…

Zail, whose memoir The Tattooed Flower recounted how her father survived the Holocaust, poignantly conveys Hanna’s mounting losses... An elegant, disturbing portrait of one of history’s bleakest moments, offset by the subversive power of love.
—Publishers Weekly

Zail’s story is as gut-wrenching as any Holocaust tale, particularly when, upon their liberation by Russian troops, Hanna discovers that her own dehumanizing experiences in the labor camp were nothing compared to the barbarity that occurred in the extermination camps. The haunting, matter-of-fact tone of Hanna’s story will likely resonate with teens learning about the Holocaust.
—Booklist

Hanna's story is reminiscent of such classics as Aranka Siegal's Upon the Head of the Goat (1981). ... With fewer living Holocaust survivors each year, it's increasingly important to tell their story, and this is one.
—Kirkus Reviews

Readers also feel the pressure as Hanna tries to please the commandant while witnessing his brutality. ... The novel will appeal to a wide range of readers.
—Association of Jewish Libraries Reviews

Suzy Zail is the author of numerous books for children and adults, including The Tattooed Flower, an account of how her father survived the Holocaust. Playing for the Commandant is her first work of fiction for young adults. She lives in Australia.
Loading...
or support indie stores by buying on