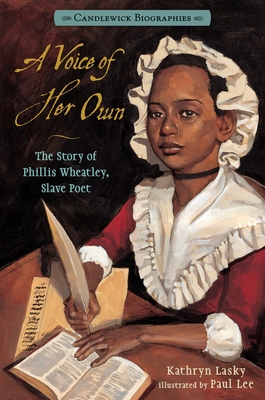 A Voice of Her Own (Hardcover)

"Lasky shows not only the facts of Wheatley’s life but also the pain of being an accomplished black woman in a segregated world." — Booklist

In 1761, a young girl was sold to the Wheatley family in Boston, who named her Phillis after the slave schooner that had carried her. Kidnapped from her home in Africa and shipped to America, she’d had everything taken from her-her family, her name, and her language. But Phillis had a passion to learn. Amid the tumult of the Revolutionary War, Phillis Wheatley became a poet and ultimately had a book of verse published, establishing herself as the first African- American woman poet this country had ever known.
Back matter includes an author’s note, an illustrator’s note, sources, and an index.

Paul Lee is a painter and freelance illustrator. He has illustrated the acclaimed AMISTAD RISING by Veronica Chambers, and THE GOOD LUCK CAT by Joy Harjo. While working on A VOICE OF HER OWN, Paul Lee had to do considerable research to make sure the illustrations were historically accurate - research that even entailed renting costumes from a local opera house.

Praise For A Voice of Her Own: Candlewick Biographies: The Story of Phillis Wheatley, Slave Poet…

Lasky shows how Wheatley's struggle for personal identity and respect paralleled the prevailing political talk of freedom and revolution. Lee's carefully researched paintings give a vivid picture of colonial Boston through the eyes of an extraordinary woman.
—San Francisco Chronicle

Lasky shows not only the facts of Wheatley's life but also the pain of being an accomplished black woman in a segregated world.
—Booklist
or
Not Currently Available for Direct Purchase
Copyright © 2020 American Booksellers Association