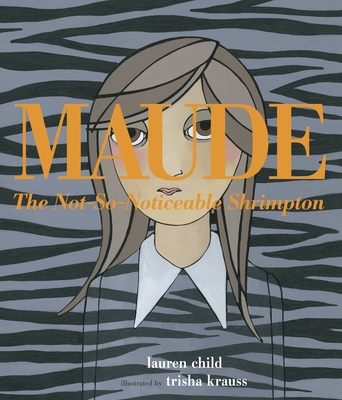 Lauren Child teams up with a debut illustrator to tell a cautionary tale about the surprising perils of craving constant attention.

Meet the Shrimpton family — so talented, so eccentric, so larger than life, you couldn’t miss them if you wanted to. Mrs. Shrimpton wears flamboyant hats, and Mr. Shrimpton’s moustache makes quite a statement. The youngsters each have a stand-out quality: beauty, dancing, singing, a sense of humor that’s a laugh a minute. Indeed, the Shrimptons live to be noticed — all that is, except Maude, who prefers to blend into the wallpaper. But when Maude receives a ferocious tiger for her birthday instead of the goldfish she asked for, might her talent for blending in come in handy? With stylized artwork evoking both Vogue magazine and Edward Gorey, here is a story to bring a smile to all the quiet stars among us.

Lauren Child has published many best-selling and award-winning books, including the hugely popular Charlie and Lola and Clarice Bean series, as well as, more recently, the Ruby Redfort series. She has won numerous awards, including the prestigious Kate Greenaway Medal. Lauren Child lives in London.

Trisha Krauss spent sixteen years working in New York for magazines and advertising agencies. Her work has been exhibited in New York and Rome. Maude the Not-So-Noticeable Shrimpton is her first picture book. Trisha Krauss lives and works as an illustrator in London.

Praise For Maude The Not-So-Noticeable Shrimpton…

This cautionary tale is full of humor (if slightly dark at times) and would greatly enhance a language-arts lesson on descriptive writing. The clever, full-color, full-bleed illustrations incorporate a variety of highly noticeable patterns and text fonts. Maude blends into them well, and discovering where she is in any given picture adds to the fun of the book.
—School Library Journal

Maude ... should strike a chord with any kid who prefers to blend into his or her surroundings. Maude does it quite literally, and the fun for readers is spotting her. ... Those with a taste for black humor will relish Maude’s gift for camouflage — a trait that suddenly seems quite useful
—Booklist Online
or support indie stores by buying on
Copyright © 2020 American Booksellers Association