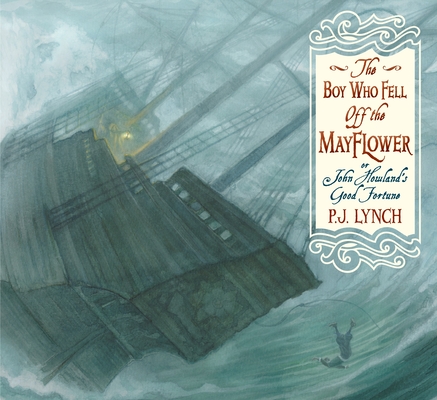 The Boy Who Fell Off the Mayflower, or John Howland's Good Fortune

In the first book he has both written and illustrated, master artist P.J. Lynch brings a Mayflower voyager’s story to vivid life.

At a young age, John Howland learned what it meant to take advantage of an opportunity. Leaving the docks of London on the Mayflower as an indentured servant to Pilgrim John Carver, John Howland little knew that he was embarking on the adventure of a lifetime. By his great good fortune, John survived falling overboard on the crossing of the Atlantic Ocean, and he earned his keep ashore by helping to scout a safe harbor and landing site for his bedraggled and ill shipmates. Would his luck continue to hold amid the dangers and adversity of the Pilgrims’ lives in New England? John Howland’s tale is masterfully told in his own voice, bringing an immediacy and young perspective to the oft-told Pilgrims’ story. P.J. Lynch captures this pivotal moment in American history in precise and exquisite detail, from the light on the froth of a breaking wave to the questioning voice of a teen in a new world.

Praise For The Boy Who Fell Off the Mayflower, or John Howland's Good Fortune…

Based on historical fact, this feast of a book, the first illustrator Lynch has authored as well, will captivate readers from its opening double-page spread...What sets this book apart from myriad Pilgrim stories is Howland's personal point of view, which helps readers enter into the tenor of the time, when the settlers' religious faith both motivated and sustained them, and the dramatic illustrations with their expert play of expression, composition, and light.Sweeping and grand, this personal take on a familiar story is an engaging success.
—Kirkus Reviews (starred review)

The clearly written, first- person account, told from John’s point of view, combines history with adventure and a hint of romance. Based on historical sources, the narrative is laced with well-imagined characterizations and conversations. The book’s wide format showcases Lynch’s dramatic and richly atmospheric watercolor and gouache paintings, which include strong individual character portrayals as well as beautifully composed scenes on land and at sea. This handsome volume offers a dramatic personal story of the Pilgrim’s voyage on the Mayflower and their early experiences in America.
—Booklist (starred review)

Coupled with richly detailed and often dramatic watercolor and gouache illustrations, Lynch’s fast-paced text brings a new excitement to the Thanksgiving story. An excellent choice for teachers seeking a new approach to the history of the Pilgrims.
—School Library Journal (starred review)

Mr. Lynch’s first few paintings in this superb picture book so capture the squalor, overcrowding and political danger that the Pilgrims faced in the Old World...
—The Wall Street Journal

Enhanced by a large format that showcases Lynch’s striking watercolor and gouache illustrations, this fictionalized account of Howland’s story will spark young readers’ interest in learning more about the Wampanaog and English people who encountered one another so long ago.
—BookPage

Howland’s voice is vibrant and convincing, and Lynch deftly integrates information known about Howland’s future...Lynch’s wa- tercolor paintings harken back to the dramatically composed and illuminated work of N. C. Wyeth.
—Bulletin of the Center for Children's Books

P. J. Lynch has written a compelling accounting of young John Howland’s story and the larger story of the Mayflower. The writing is crisp, and the facts are presented in captivating prose. The rich, detailed paintings he uses to illustrate his story evoke times past and steep the readers in Howland’s journey. This is one of the finest middle-grade historical picture books available. Don’t miss it.
—San Francisco Book Review

This handsomely illustrated volume breathes life into the familiar Pilgrim story by narrating it from the point of view of John Howland, a young man who was indentured to first Plymouth governor, John Carver...Watercolor and gouache illustrations enhance the storytelling.
—School Library Connection

P.J. Lynch, one of the most accomplished children’s book creators working today, has won the Kate Greenaway Medal twice and the Christopher Medal three times. His meticulous research brings impeccable detail to the twenty books he has illustrated, including The Christmas Miracle of Jonathan Toomey by Susan Wojciechowski, When Jessie Came Across the Sea by Amy Hest, A Christmas Carol by Charles Dickens, and Mysterious Traveler by Mal Peet and Elspeth Graham. P.J. Lynch lives in Dublin.
Loading...
or support indie stores by buying on