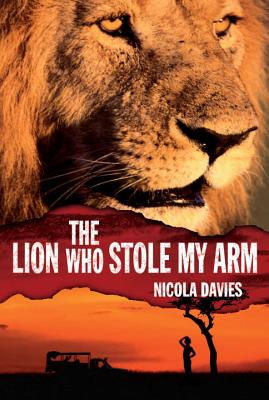 The Lion Who Stole My Arm (Heroes of the Wild)

Zoologist Nicola Davies presents an illustrated novel for young readers that proves you don’t need two arms to be strong.

Pedru has always wanted to be a great hunter like his father, but after a lion takes his arm, he worries that he’ll always be the crippled boy instead. Pedru longs to kill the lion that mauled him and strengthens himself to be ready for the hunt. But when the opportunity arises, will Pedru have the strength to turn his back on revenge? Zoologist Nicola Davies perfectly merges a heart-pounding adventure with an important message about conservation, and Annabel Wright’s gorgeous black-and-white illustrations bring Pedru’s story to life.

Davies, already well established as a premier science writer for children, demonstrates her considerable fiction-writing chops, elegantly tailoring this to a middle-grades audience and utilizing a recognizable chapter-book format of short chapters and plentiful spot art. Pedru’s tale is seamlessly blended with a clear-eyed portrayal of perilous relationship between lions and farmers in regions of present day Africa, and an afterword entitled “Living with Lions” summarizes the problem of peaceful coexistence in direct terms. This will be a first choice for big-cat lovers and a powerful selection for a classroom animal conservation unit.
—Bulletin of the Center for Children's Books (starred review)

Davies brings her typical sharp insights into animal behavior and ecological conservation to the story... While Pedru’s anxieties and frustrations are slow to recede, Davies emphasizes the positive developments that arise from his tragedy, including his discovery of a drawing talent and introduction to a group of scientists studying the lions. An epilogue underpins the story’s positivity, and an afterword details the dire threats facing lions in the wild.
—Publishers Weekly

[A] nuanced and ultimately encouraging story of reluctant accommodation between man and beast.
—The Wall Street Journal

Davies’s story, both subtle and thoughtful, is ... an exciting adventure tale. ... Children are rarely asked to consider all sides of ecological issues, and this look at a dwindling species is respectful of its readers’ capacity to face ethical decisions in a thoughtful way. Helpful footnotes throughout explain the many lesser-known African flora and fauna that serve as a rich backdrop to the story, and the emotion-filled black-and-white illustrations add just the right touch. Excellent factual notes from author and zoologist Davies are appended.
—The Horn Book

[T]his brief tale bridges the gap between the few picture books and longer novels set in this region.
... [P]rovides adventure and fills a cultural niche for chapter-book readers.
—Kirkus Reviews

Davies’ slim book carefully teaches without preaching, as Pedru learns to look at lions in a different way and to contemplate peaceful, workable solutions to perilous problems. It also conveys the message that strength comes from within. Wright’s black-and-white illustrations evocatively convey Pedru’s story.
—Booklist

Exciting... While the story starts harshly, it ends on a positive note. The author finishes with facts about lion conservation in East Africa.
—Library Media Connection

Nicola Davies is a zoologist and the award-winning author of many books for children, including Surprising Sharks, which was a Boston Globe–Horn Book Honor Winner; Deadly! The Truth About the Most Dangerous Creatures on Earth; and Ice Bear: In the Steps of the Polar Bear. She lives in Wales.

Annabel Wright’s work has been used in campaigns for Amnesty International and the School of Visual Arts in New York, and has also appeared in newspapers and magazines such as the Economist and the Financial Times. She lives in Scotland.
Loading...
or
Not Currently Available for Direct Purchase