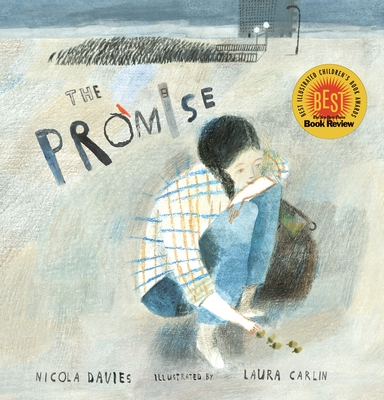 An allegorical tale of hope takes on new life in this stirring, gorgeously illustrated story.

On a mean street in a mean, broken city, a young girl tries to snatch an old woman’s bag. But the frail old woman, holding on with the strength of heroes, says the thief can’t have it without giving something in return: the promise. It is the beginning of a journey that will change the thieving girl’s life — and a chance to change the world, for good. Here is the story of a magical discovery that will touch the heart and imagination of every reader, young and old. In an exciting collaboration, author Nicola Davies joins forces with illustrator Laura Carlin to create a contemporary tale inspired by Jean Giono’s 1953 story, L’homme qui plantait des arbres.

Nicola Davies is an award-winning author whose many books for children include Outside Your Window: A First Book of Nature, Ice Bear, Big Blue Whale, and the Silver Street Farm series. Underlying all of Nicola Davies’s work is the belief that a relationship with nature is essential for every human being, and that now, more than ever, we need to renew that relationship. She lives in Wales.

Laura Carlin is the illustrator of The Iron Man by Ted Hughes, which was awarded an honorable mention in the Bologna Ragazzi Award fiction category. Her artwork has been featured in Vogue, the New York Times, and the Guardian. The Promise is her first picture book. She lives in London.

Praise For The Promise…

Inspired by Jean Giono’s 1953 story, L’homme qui plantait des arbres, this tale is a sturdy one that is made even more emphatic by Davies’ terse writing style. The text is heightened in every way by Carlin’s outstanding mixed-media artwork.
—Booklist (starred review)

A message of hope infuses Davies's story... In her first picture book, Carlin creates a chalky, ashy landscape, which she gradually peppers with specks of color as the girl plants the acorns... Davies's parable-like narrative leaves a quietly powerful impression while avoiding preaching.
—Publishers Weekly

The illustrations turn to glorious full color as the world becomes a better place. The endpapers reflect the change from a sad story at the beginning to the positive, life-changing event at the end. A thoughtful book, told with simplicity, with a poignant message.
—School Library Journal

[An] earnest parable on how nature will provide an easy cure for the physical and moral sterility of urban life.
—Kirkus Reviews

[T]his is a gentle story about people’s restorative relationship with nature. Muted mixed-media illustrations come to life as the story progresses until the pages are in full bloom. Pair this with Peter Brown’s The Curious Garden for a storytime about urban gardening at its best.
—Library Media Connection

A picture book that at first seems dystopic but is ultimately about the healing power of nature. ... Carlin opens with scratchy illustrations of harsh cityscapes colored gray and brown. Gradually, the pictures grow softer with hints of green and dashes of red and blue, until we see full bursts of color, not just from trees and flowers, but from within the people themselves.
—The Horn Book

The striking mixed-media illustrations complement the text nicely: Carlin’s work echoes Sweet’s in Bryant’s A Splash of Red in its use of interesting perspective, sketchy details layered on top of backgrounds, and hand-lettering throughout to evoke a child’s-eye view of the world. ... The book’s lyricism does mean it’s lovely when read aloud, making this a possible choice as a green-themed and sensitive bedtime story.
—Bulletin of the Center for Children's Books
or
Not Currently Available for Direct Purchase
Copyright © 2020 American Booksellers Association