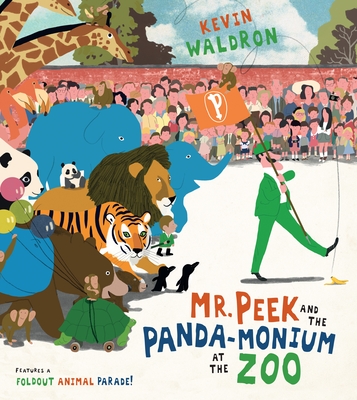 Peek Zoo is holding an animal parade to celebrate the birth of their baby panda. But when the day arrives, nothing is ready. As Mr. Peek races around preparing, he leaves a trail of chaos — including an escaped baby panda heading for the lion’s den! Thank goodness Mr. Peek’s son, Jimmy, is there to save the day and ensure the crowd gets the best animal parade ever — marching proudly across a huge gatefold!

Praise For Panda-monium at Peek Zoo…

Few will be able to resist this sweet tale of adult incompetence and youthful problem-solving skills.
—Kirkus Reviews

Waldron’s digital illustrations combine flat patches of vivid color, painterly textures, and samples of (intentionally pixilated) photographs, arranged in dynamic composition, all with a decidedly Beatles-era British aesthetic. Each of Peek’s obvious missteps is depicted, and children will enjoy searching the illustrations for more visual jokes. A final gatefold exhibits the eventual parade, complete with a hilarious promise for one last hiccup. This one packs plenty of fun for shared reading and plenty of detail for repeated, individual exploration.
—Booklist

The bungling Mr. Peek is back. After creating confusion in Mr. Peek and the Misunderstanding at the Zoo, he now plans an animal parade to celebrate a newborn panda. ... People and objects are composed of colored shapes, large and small, helping to define focal areas.
—Library Media Connection

Kevin Waldron loves to draw animal characters, so when his sketchbook became a paper zoo, he created Mr. Peek to take care of them. His first adventure, Mr. Peek and the Misunderstanding at the Zoo, won a Bologna Ragazzi Award. Kevin Waldron lives in New York City.
Loading...
or
Not Currently Available for Direct Purchase