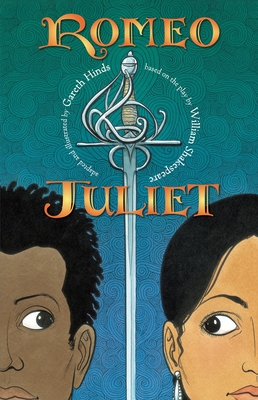 She’s a Capulet. He’s a Montague. But when Romeo and Juliet first meet, they don’t know they’re from rival families — and when they find out, they don’t care. Their love is honest and raw and all consuming.But it’s also dangerous. How much will they have to sacrifice before they can be together?In a masterful adaptation faithful to Shakespeare’s original text, Gareth Hinds transports readers to the sun-washed streets and market squares of Shakespeare’s Verona, vividly bringing the classic play to life on the printed page.

Praise For Romeo and Juliet…

Cleaving to Shakespeare’s words and his dramatic arc, Hinds creates another splendid graphic novel, tracing each scene in taut, coherent, and expertly deployed dialogue. Hinds’s characters, in period array modified by a few more contemporary touches, are poignantly specific yet as universal as this tragic tale of young love demands. ... . Expertly pacing the drama with varied frames, often with sharp, action-propelling angles, Hinds explicates and amplifies Shakespeare’s story on every page, including wordless fight scenes that highlight pivotal details. ... From swirling action to subtly delineated emotion, he delivers the play’s essence and beauty, its glorious language, furious conflict, yearning love, and wrenching tragedy. This is not only a wonderfully accessible introduction to a full text or (better yet) theatrical production; it’s a visual delight for anyone.
—The Horn Book (starred review)

The Shakespearean language is abridged but not adapted into contemporary English; footnotes explain words that could be confusing to young audiences. The use of lines and colorful watercolors is striking, especially when illustrating action such as dancing and sword fights.
—School Library Journal

[A] striking rendition of the play. ... With its sumptuous colors and fealty to the original text, this sophisticated "comic" would suit any strong reader over the age of 12.
—The Wall Street Journal

The text is skillfully edited, and the panels easy to follow, especially as the warring families' costumes are color-coded. The effect is that of a good stage production: Shakespeare's language speaks clearly to modern ears.
—Newsday