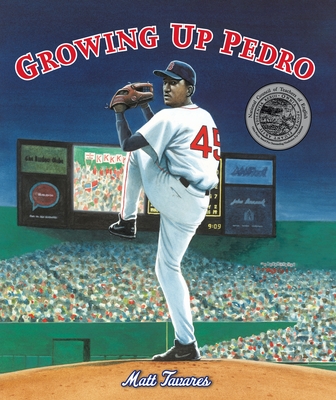 The love between brothers is key to Matt Tavares’s tale of Dominican pitcher Pedro Martínez, from his days of throwing rocks at mangoes to his years as a major-league star.

Before Pedro Martínez pitched the Red Sox to a World Series championship, before he was named to the All-Star team eight times, before he won the Cy Young three times, he was a kid from a place called Manoguayabo in the Dominican Republic. Pedro loved baseball more than anything, and his older brother Ramon was the best pitcher he’d ever seen. He’d dream of the day he and his brother could play together in the major leagues—and here, Matt Tavares tells the story of how that dream came true. In a fitting homage to a modern day baseball star, the acclaimed author-illustrator examines both Pedro Martínez’s improbable rise to the top of his game and the power that comes from the deep bond between brothers.

Praise For Growing Up Pedro: How the Martinez Brothers Made It from the Dominican Republic All the Way to the Major Leagues…

The beautiful illustrations complement the narrative and the selection would partner well with other biographies about baseball players, including those by Matt Tavares: Henry Aaron’s Dream and There Goes Ted Williams.
—Literacy Daily

Matt Tavares is the author-illustrator of Henry Aaron's Dream, There Goes Ted Williams, and Becoming Babe Ruth as well as Zachary's Ball, Oliver’s Game, and Mudball. He is also the illustrator of Doreen Rappaport's Lady Liberty and Alicia Potter’s Jubilee!, among others. Matt Tavares lives in Ogunquit, Maine.
Loading...
or
Not Currently Available for Direct Purchase