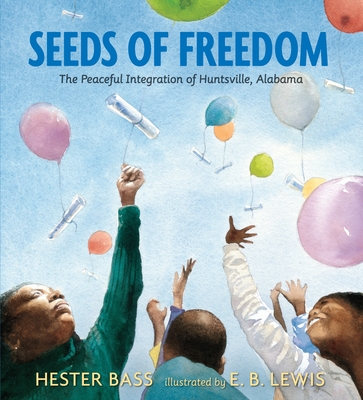 The Peaceful Integration of Huntsville, Alabama

Explore a little-known story of the civil rights movement, in which black and white citizens in one Alabama city worked together nonviolently to end segregation.

Mention the civil rights era in Alabama, and most people recall images of terrible violence. But something different was happening in Huntsville. For the citizens of that city, creativity, courage, and cooperation were the keys to working together to integrate their city and schools in peace. In an engaging celebration of this lesser-known chapter in American and African-American history, author Hester Bass and illustrator E. B. Lewis show children how racial discrimination, bullying, and unfairness can be faced successfully with perseverance and ingenuity.

Praise For Seeds of Freedom: The Peaceful Integration of Huntsville, Alabama…

An engrossing and heart-wrenching history... Bass’s forthright, passionate prose and Lewis’s searing, expansively imagined watercolors take readers to a time and place when the New Frontier’s rockets heralded American exceptionalism and pride, while bigotry and discrimination were justified as “just the way it is.” ... Unflinchingly honest and jubilantly hopeful, this is nonfiction storytelling at its best.
—Publishers Weekly (starred review)

The use of present tense gives a great sense of immediacy to the text as it transports readers into the past to watch events unfold. The relatively peaceful changes in Huntsville are briefly contrasted with the violence in Birmingham around the same time. Capturing the period with finesse, Lewis’ expressive watercolor paintings record the events and settings in beautifully composed scenes. His portrayal of people is particularly fine, conveying the personalities, attitudes, and emotions of individuals as well as the essential dignity of the nonviolent protesters. A valuable introduction to the civil rights period.
—Booklist (starred review)

Bass writes in the present tense with a conversational tone... She includes details that will resonate with children while also imparting an inspirational message, tinged with her own civic pride (she is a former resident of Huntsville), about community activism. ... A book that is as quietly inspiring as its subject.
—Kirkus Reviews

Lewis’s trademark watercolor paintings pair perfectly with this lyrical recounting of events, and he masterfully moves between detailed illustrations depicting faces of grim determination of lunch counter patrons to the more impressionistic scenes of protesters facing water hoses. The book covers quite a bit of ground, both in time and content and can be long for a read-aloud, but it’s well worth the time to share such a moving, inspirational story.
—School Library Journal

Making good use of the title metaphor, Bass does an excellent job of acknowledging difficulties—and harrowing events in other parts of the South—and work still to be done, while also emphasizing the “nonviolence and dignity, and cooperation and courage” of a community that carefully nurtured freedom, from seeds gently sown to “sweet fruit.” Lewis’s lovely, realistic paintings depict time and place, underscoring both the steely determination and soaring hopefulness of ordinary people dedicated to initiating change. Both informative and rousing, this book is a solid choice for studies of the civil rights movement and more generalized discussion of peaceful protest and the effectiveness of grass-roots efforts.
—SLJ Curriculum Connections

Throughout this engaging story about Huntsville's peaceful uprising, Bass skillfully intertwines the history of the civil rights movement. Lewis's watercolor illustrations portray momentous events like snapshots in a photo album. "Seeds of Freedom" is a stirring revelation of how the skirmishes and successes of one community caused a giant ripple across the nation.
—Children's Bookwatch

An extraordinarily powerful true story, this selection is a must-read.
—from Kendal Rautzhan

Hester Bass is the author of the picture-book biography The Secret World of Walter Anderson, which won an Orbis Pictus Award for Outstanding Nonfiction for Children, as well as the picture book So Many Houses, illustrated by Alik Arzoumanian. Formerly residing in Huntsville, Alabama, she now lives in Santa Fe, New Mexico.

E. B. Lewis is the illustrator of more than thirty books for children, including The Secret World of Walter Anderson by Hester Bass. Among his many honors are a Coretta Scott King Illustrator Award for Talkin’ About Bessie: The Story of Aviator Elizabeth Coleman by Nikki Grimes, as well as four Coretta Scott King Honor Awards. He lives in Folsom, New Jersey.
Loading...
or support indie stores by buying on
(This book is on backorder)