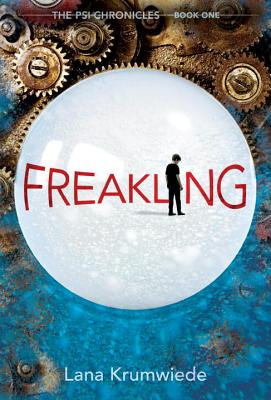 “Twelve-year-old Taemon lives in a parallel world in which part of the population possesses psi -- the ability to move and manipulate everyday objects in every facet of daily life. When Taemon loses his power and must live with those who use their hands to eat, work, dress, and play, he finds his old ways of living thrown into question. This is a book with battles, secret doors, sporting tournaments, and power-hungry priests, but it?s the bigger question of how we live that leaves the reader, no matter what age, with a sense that this kind of a world may someday intersect with our own. It's this uneasy feeling that makes this story unforgettable.”
— Jenesse Evertson, bbgb books, Richmond, VA
View the List

In twelve-year-old Taemon’s city, everyone has a power called psi — the ability to move and manipulate objects with their minds. When Taemon loses his psi in a traumatic accident, he is exiled to the powerless colony, where he is accepted unconditionally. But for all its openness, there are mysteries at the colony, too — dangerous secrets that would give unchecked power to psi wielders if discovered. When Taemon unwittingly leaks one of these secrets, will he have the courage to repair the damage — even if it means returning to the city and facing the very people who exiled him?

Praise For Freakling (The Psi Chronicles #1)…

Memorable characters; a smooth, suspenseful plotline; and a fascinating premise make this debut a worthy addition to the genre. Give it to kids who are a little too young for Suzanne Collins’s The Hunger Games.
—School Library Journal

Readers who are not yet ready for The Hunger Games should be attracted to resourceful Taemon, as he learns that real strength comes in many different forms
—Publishers Weekly online

This is an exciting tale that will keep readers hooked until the end.
—Library Media Connection