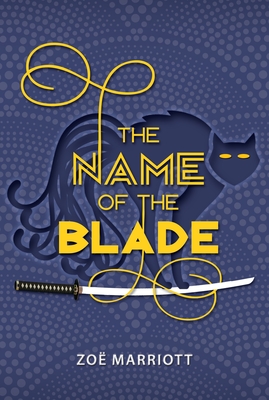 The Name of the Blade

Ancient Japanese gods and monsters are unleashed on modern-day London in this first book of an epic trilogy from acclaimed fantasy writer Zoë Marriott.

When Mio sneaks the family’s katana — a priceless ancestral sword —from her parents’ attic, she just wants to spice up a costume. But the katana is much more than a dusty antique. Awakening the power within the sword unleashes a terrible, ancient evil onto the streets of unsuspecting London. But it also releases Shinobu, a fearless warrior boy, from the depths of time. He helps to protect Mio — and steals her heart. With creatures straight out of Japanese myths stalking her and her friends, Mio realizes that if she cannot keep the sword safe and learn to control its legendary powers, she will lose not only her own life . . . but the love of a lifetime.

Praise For The Name of the Blade…

Marriott gifts Mio with a bit of uncertainty and typical teen angst, tempering the hard edge of the high-stakes-action scenes with convincing, swoonworthy moments between Mio and Shinobu. Fans of Japanese lore will appreciate the wily kitsune tribespeople, who agree to help this unlikely trio, and there’s enough nail-biting action and near misses in the romance department to keep every reader on their toes. First in a trilogy originally published in the UK, this will win American fans who like their fantasy urban, their romances mysterious, and their swords well sharpened.
—Booklist

A crucial battle for a highly sympathetic character and a clever twist on Japanese mythology. The story is slow to develop, but readers who keep with it will be rewarded with unique and fun characters, a truly dire conflict, and a lifetime-spanning love story. This is a particularly good choice for library collections that need more myth-based fiction, and want to branch out from Greek myth and fairy tales.
—School Library Journal

Zoë Marriott is the author of the young adult fantasy novels The Swan Kingdom, Daughter of the Flames, and Shadows on the Moon, which won the prestigious Sasakawa Prize. She lives in England.
Loading...
or
Not Currently Available for Direct Purchase