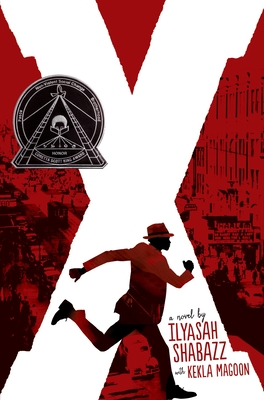 Cowritten by Malcolm X’s daughter, this riveting and revealing novel follows the formative years of the man whose words and actions shook the world.

Malcolm Little’s parents have always told him that he can achieve anything, but from what he can tell, that’s a pack of lies—after all, his father’s been murdered, his mother’s been taken away, and his dreams of becoming a lawyer have gotten him laughed out of school. There’s no point in trying, he figures, and lured by the nightlife of Boston and New York, he escapes into a world of fancy suits, jazz, girls, and reefer. But Malcolm’s efforts to leave the past behind lead him into increasingly dangerous territory. Deep down, he knows that the freedom he’s found is only an illusion—and that he can’t run forever.

X follows Malcolm from his childhood to his imprisonment for theft at age twenty, when he found the faith that would lead him to forge a new path and command a voice that still resonates today.

Ilyasah Shabazz, third daughter of Malcolm X, is an activist, producer, motivational speaker, and author of the critically acclaimed Growing Up X and the picture book Malcolm Little: The Boy Who Grew Up to Become Malcolm X. She lives in Westchester County, New York.

Kekla Magoon is the Margaret A. Edwards Award-winning author of more than a dozen books for young readers, including Fire in the Streets and How It Went Down. She is also the coauthor, with Ilyasah Shabazz, of X: A Novel, which was long-listed for the National Book Award and received an NAACP Image Award and a Coretta Scott King Honor. Kekla Magoon grew up in Indiana and now lives in Vermont, where she serves on the faculty at Vermont College of Fine Arts.
Loading...
or
Not Currently Available for Direct Purchase