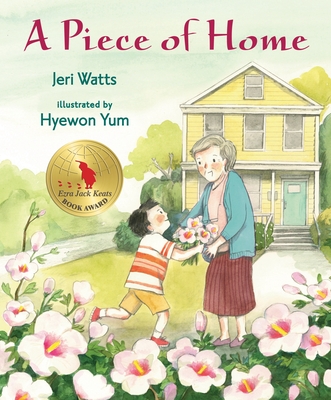 A Piece of Home

A child-friendly story about the trials and triumphs of starting over in a new place while keeping family and traditions close.

When Hee Jun’s family moves from Korea to West Virginia, he struggles to adjust to his new home. His eyes are not big and round like his classmates’, and he can’t understand anything the teacher says, even when she speaks s-l-o-w-l-y and loudly at him. As he lies in bed at night, the sky seems smaller and darker. But little by little Hee Jun begins to learn English words and make friends on the playground. And one day he is invited to a classmate’s house, where he sees a flower he knows from his garden in Korea — mugunghwa, or rose of Sharon, as his friend tells him — and Hee Jun is happy to bring a shoot to his grandmother to plant a “piece of home” in their new garden. Lyrical prose and lovely illustrations combine in a gentle, realistic story about finding connections in an unfamiliar world.

Praise For A Piece of Home…

This gentle, compassionate immigration narrative shows the difficulties of adapting to a new culture. Unlike most picture books on the subject, its setting is contemporary and its intergenerational story reflects the struggles of several family members. Scenes in Korea are written in past tense, but once the setting shifts to America, present tense adds immediacy to the simply worded, effective storytelling. Yum, a Korean artist who moved to America, contributes sensitive and expressive watercolor illustrations. A perceptive portrayal of an important American experience.
—Booklist (starred review)

Moving from Korea to West Virginia, a young boy leaves the familiar behind...Watts' clear storytelling successfully conveys Hee Jun's emotional journey to readers, and Yum's emotive illustrations sensitively complement the text. Immigrant children will relate to the head-spinning switch from ordinary to different, and their classmates might better understand the emotional impact of moving to a foreign land.
—Kirkus Reviews

This immigration story, paired with Irena Kobald’s My Two Blankets, can offer readers who feel different and alone hope that things will get better, and may encourage others to help them on their way. The lengthy text paints a realistic picture of difficulties faced by a family striving to make a new start, and the positive resolution is quietly satisfying.
—School Library Journal

Watts presents an emotionally credible account of what life can be like for newcomers to a place and sensitively portrays Hee Jun’s experiences...Yum’s tidy watercolor illustrations feature her usual rosy-cheeked figures, and the art skill- fully conveys emotion, increasing the amount of background detail and using an ever-livelier palette as Hee Jun gradually settles into American life. Use possibilities abound for this thoughtful and thought-provoking title.
—Bulletin of the Center for Children's Books

The soft colorful pictures connect beautifully to the emotions and relationships of the characters. This story is a great jumping-off point for discussions around tolerance, differences, and being the new kid in school.
—School Library Connection

Jeri Watts has written numerous short stories as well as the picture book Keepers and the middle-grade novel Kizzy Ann Stamps. She lives in Virginia, where she is a professor at Lynchburg College.

Hyewon Yum is the author and illustrator of several acclaimed books for children. She has received the Society of Illustrator's Founder's Award, the Ezra Jack Keats New Illustrator Award, an Honorable Mention for the Bologna Ragazzi Award, and the Golden Kite Award for her work. She lives in Brooklyn, New York.
Loading...
or support indie stores by buying on