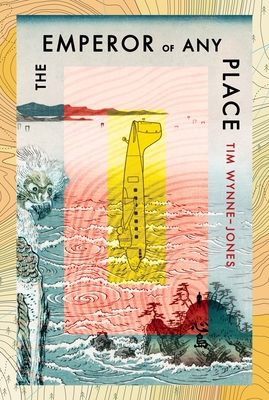 The Emperor of Any Place (Hardcover)

The ghosts of war reverberate across the generations in a riveting, time-shifting story within a story from acclaimed thriller writer Tim Wynne-Jones.

When Evan’s father dies suddenly, Evan finds a hand-bound yellow book on his desk—a book his dad had been reading when he passed away. The book is the diary of a Japanese soldier stranded on a small Pacific island in WWII. Why was his father reading it? What is in this account that Evan’s grandfather, whom Evan has never met before, fears so much that he will do anything to prevent its being seen? And what could this possibly mean for Evan? In a pulse-quickening mystery evoking the elusiveness of truth and the endurance of wars passed from father to son, this engrossing novel is a suspenseful, at times terrifying read from award-winning author Tim Wynne-Jones.

Tim Wynne-Jones is the accomplished author of numerous YA novels, including Blink & Caution, winner of the 2012 Boston Globe–Horn Book Award, and The Uninvited, short-listed for the Arthur Ellis Award and the Governor General’s Literary Award. In 2012, Tim Wynne-Jones was named an Officer of the Order of Canada for his services to literature. He lives with his wife in Ontario.

Praise For The Emperor of Any Place…

Dual stories of strength and resilience illuminate the effects that war has on individuals and on father-son relationships, effects that stretch in unexpected ways across generations as Evan and Griff make their way toward a truce. An accomplished wordsmith, Wynne-Jones achieves an extraordinary feat: he eliminates the hidden depths of personalities and families through a mesmerizing blend of realism and magic.
—Kirkus Reviews (starred review)

Readers will be swept up quickly in the tense relationship between Evan and Griff, as well as the unlikely friendship between enemy soldiers fighting for survival in a surreal landscape. Without spelling out the metaphoric significance of the story within the story, Wynne-Jones provides enough hints for readers to make connections and examine the lines between war and peace, as well as hate and love.
—Publishers Weekly (starred review)

Wynne-Jones writes with a sure hand and a willingness to take readers into uncharted territory. The main characters in both time periods are complex and vividly portrayed, while the stories, both supernatural and realistic, quietly take note of nuances that standard narratives overlook. A riveting, remarkable novel by a reliably great Canadian writer.
—Booklist (starred review)

Offering a unique take on the World War II period, this intergenerational tale is an excellent addition to most YA collections.
—School Library Journal (starred review)

There’s a whole lot going on here: Evan’s and Griff’s shared heartbreak, exhibited in very different ways, and their own increasingly complicated relationship; the stark contrast between the mainly nondescript “Any Place” of Evan’s suburban Ontario and the horror of the desert island; and the unlikely friendship between enemy soldiers in the story-within-a-story. All these seemingly disparate parts come together in fascinating ways, resulting in an affecting and unforgettable read.
—The Horn Book (starred review)

English-Canadian author Tim Wynne-Jones (The Uninvited, Blink & Caution) crafts a truly spellbinding novel in which the mystical, desert-island, wartime chronicle is as riveting as the modern-day story... and the ways they begin to fuse together are breathtaking.
—Shelf Awareness (starred review)

The layers of intergenerational strife, savage warfare, lingering suspicion and gradual healing are quilted into a warming narrative that is both uncompromisingly tragic and holistically redemptive. Readers will carry this haunting story with them for a long time.
—Bulletin of the Center for Children's Books (starred review)

...the historical aspect combined with the supernatural will draw readers of varying interests.
—School Library Connection