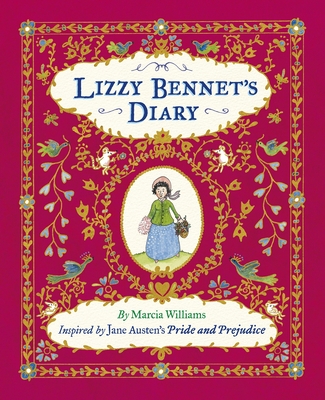 Jane Austen’s beloved heroine Lizzy Bennet tells the story of Pride and Prejudice in her own words in an illustrated diary created by Marcia Williams.

When Lizzy Bennet’s father gives her a diary, she fancies she will use it to write a novel, as her real life is exceedingly dull. Then the handsome Mr. Bingley moves to nearby Netherfield Park, and suddenly life is every bit as thrilling as a novel would be. Who will he dance with at the Meryton ball? Who is his haughty friend? Will Lizzy ever receive a marriage proposal? Readers will have to read her diary to find out! Marcia Williams offers a lively introduction to Jane Austen’s Pride and Prejudice in a highly illustrated scrapbook-diary format, featuring such novelties as foldout notes from sisters and suitors, an elegant bill of fare, and an invitation to the ball.

The enduring appeal of Jane Austen’s Pride and Prejudice lies at least in part in Elizabeth Bennet’s piquant observations about her sisters and her neighbors. These take center stage in this smartly conceived abridgement of the novel for a young audience, fashioned as a diary given to “Lizzy” by her father. ... This wry sense of humor animates the text throughout and makes the perennially popular love story not only accessible but thoroughly absorbing for young readers, who will surely be captivated by some aspect of Lizzy’s tale; after all, who doesn’t have an embarrassing family, or wish for true love, or find snooty people tiresome, etc., etc.? Jane Austen’s early critics called her sunshine; Marcia Williams has managed to capture that feeling of light and warmth for a new generation of readers.
—Bulletin of the Center for Children's Books (starred review)

A delightful diary version designed to introduce young readers to the classic. Capturing the quick-witted Elizabeth’s personality, the story is told in journal entries, augmented with the author’s visually appealing illustrations (people, pets, sidenotes, etc.), all attributed to Lizzy as if she were painting them herself. ... The perfect read- together for a mother, grandmother, older sister, or aunt, with a delivery method that makes the well-worn story immediate and accessible.
—Booklist

Tiny sketches, watercolors, recipes and wonderful little foldouts of invitations, letters and other minutiae encourage much perusing. Dried flowers, reproductions of paintings and other objects are worked into the diary collages, as are comments by Lizzy about dresses, ribbons and delicacies. Her delight in walking through the fields and opening her mind to many things is evident, and of course, it all ends with the appropriate weddings.
—Kirkus Reviews

This illustrated middle grade treasure brings Elizabeth Bennet alive for the younger crowd. ... Austen diehards will be as charmed as girls meeting the Bennet clan for the first time.
—Afro Times

Marcia Williams has written and illustrated many books in a highly successful and entertaining comic-strip style. Among her many retellings are The Romans: Gods, Emperors, and Dormice; Ancient Egypt: Tales of Gods and Pharaohs; Greek Myths; Tales from Shakespeare; and More Tales from Shakespeare. Marcia Williams lives in London.
Loading...
or
Not Currently Available for Direct Purchase