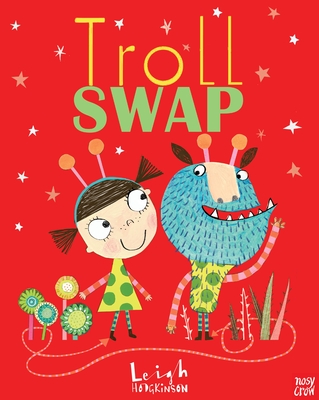 Timothy Limpet feels out of place in his troll family. He likes things to be just so, and most trolls, frankly, don’t. Tabitha Lumpit likes things to be loud, loopy, and messy, and she feels like a fish out of water in her very neat family. Sometimes they wonder if their families really see them for who they are. So Timothy and Tabitha swap places . . . with hilarious and touching results.

The delightful mixed-media illustrations and the varying typefaces exhibit a childlike essence and will tickle the funny bones of young readers. The fact that the parents make an attempt to behave a bit like their children is a sweet plus. This charming story with its engaging art will be well received by children.
—School Library Journal

Mixed media illustrations are pleasant and support the story. The lesson, be who you are, is delivered without being preachy. Readers are going to get a kick out of this book!
—Library Media Connection

Happily reminiscent of Mo Willem’s "Naked Mole Rat Gets Dressed," this is a goofball ode to individualism infused with a childlike zeal. This mostly comes courtesy of Hodgkinson’s mixed-media illustrations, which look plucked from the wall of a first-grade classroom—the characters are built of rough geometric shapes and filled in with the boldest of stripes and colors. Even the hand-drawn font is effective: huge and sprawling for Tabitha and aligned above neat dashed lines for Timothy. Great for your little trolls.
—Booklist

Design elements add much appeal, with childlike stylings and exaggerated perspectives. In a nifty touch, the text in dialogue bubbles is neatly typed for the “nice” characters and looks like clumsy block lettering for the “mucky.” Appealing.
—Kirkus Reviews

If you love a girl who "would rather pick her nose than a flower any day of the week," then you're in for a treat. ... Full of flamingo pink, screaming red and lime green, "Troll Swap" features a troll with a charming bulldog underbite and engaging dialogue that's scrawled in black crayon or printed with teacher's pet precision. The scenes in which Tabitha wows the trolls with her bad behavior and Timothy kisses up to the Lumpits by cleaning their daughter's room are delightful, and the conclusion ... is delivered with style and energy.
—The Chicago Tribune
or support indie stores by buying on
Copyright © 2020 American Booksellers Association