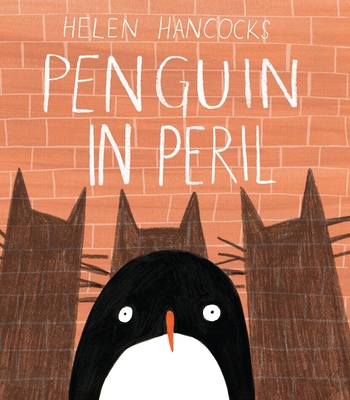 With bare cupboards and hungry bellies, three cats steal a penguin to catch them fish. A hilarious sequence of events unfolds as the penguin makes his escape, gets mistaken for a nun and a waiter, then finds his way safely home. Meanwhile, the cats are caught for their crime and sent to jail — for a lifetime of gruel. Deftly told and beautifully illustrated by exciting debut author-illustrator Helen Hancocks.

Praise For Penguin in Peril…

[A] sprightly author-illustrator debut... Graphic shapes in pencil and bold gouache colors not only make for striking compositions, they suggest humor in the simplest of ways. Clever details abound, like the underground map of the penguin’s escape via subway and the animals’ image-only dialogue bubbles.The penguin in peril prevails in this fresh and funny English import.
—Kirkus Reviews (starred review)

Hancocks’s artwork is first cousin to Maira Kalman’s, a series of cheerful gouaches in which grown-up metropolitan civilization is depicted with childlike charm. Cheeky humor crowds the pages; in the restaurant, the penguin joins a procession of formally dressed waiters into the dining room, holding the skeleton of the fish he’s just downed like a trophy.
—Publishers Weekly

The fun is finding the waddling penguin as he stays one step ahead of the felines, hiding amongst black-and-white nuns, riding the subway, and waiting on tables. ... The mixed- media pictures are delightfully comical but show serious graphic artistry as well. The design, with its panels and spreads, will keep young listeners—and their readers—on their toes.
—Booklist Online

The cartoon-style illustrations are bright, cheerful, droll, and perfect for this tale.
—Library Media Connection

This wacky tale by Helen Hancocks will keep little ones giggling.
—Parents Magazine

Helen Hancocks graduated in 2011 with a degree in illustration and animation from Manchester School of Art. She uses a mixture of crayon, watercolor, ink, and pen, combined digitally. Her work often features cats. Helen Hancocks lives in Lincoln, England.
Loading...
or support indie stores by buying on