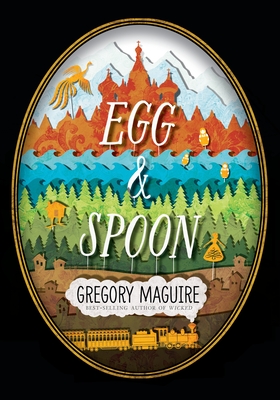 In this tour de force, master storyteller Gregory Maguire offers a dazzling novel for fantasy lovers of all ages.

Elena Rudina lives in the impoverished Russian countryside. Her father has been dead for years. One of her brothers has been conscripted into the Tsar’s army, the other taken as a servant in the house of the local landowner. Her mother is dying, slowly, in their tiny cabin. And there is no food. But then a train arrives in the village, a train carrying untold wealth, a cornucopia of food, and a noble family destined to visit the Tsar in Saint Petersburg — a family that includes Ekaterina, a girl of Elena’s age. When the two girls’ lives collide, an adventure is set in motion, an escapade that includes mistaken identity, a monk locked in a tower, a prince traveling incognito, and — in a starring role only Gregory Maguire could have conjured — Baba Yaga, witch of Russian folklore, in her ambulatory house perched on chicken legs.

Praise For Egg and Spoon…

Though the story bears some marks of a heroic quest, it is really a series of dreamy, expertly painted vignettes, set pieces both absurd and spectacular. … Maguire’s wit is shown to best advantage when in sync with his lush whimsy… In this surfeit of myth and mayhem, there are also moments of poignant quiet, when the grand quest of saving the magic of Russia recedes. In these moments, the human comes to the fore, and our focus narrows once more to a child longing for a parent, a mother longing for a child, the aching burden of living through suffering that life demands again and again. … It is impossible not to root for girls and watches and aunts alike, and to cheer their little victories as acts of grace.
—The New York Times Book Review

Maguire marries the traditional “Prince and the Pauper” narrative to the Russian folktale of Baba Yaga with his trademark wit and aplomb. His lyrical descriptions of the drab countryside are equally detailed and moving as the charmed, floating courts of the Romanov dynasty. Each character is well-drawn and fascinating... The author weaves a lyrical tale full of magic and promise, yet checkered with the desperation of poverty and the treacherous prospect of a world gone completely awry. Egg and Spoon is a beautiful reminder that fairy tales are at their best when they illuminate the precarious balance between lighthearted childhood and the darkness and danger of adulthood.
—School Library Journal (starred review)

An epic rich with references, aphorisms and advice. An ambitious, Scheherazade-ian novel, rather like a nesting-doll set of stories, that succeeds in capturing some of the complexities of both Russia and life itself.
—Kirkus Reviews (starred review)

Like the matryoshka doll Elena carries, there are a lot of layers to Maguire’s story. Rich, descriptive language will reward readers who like to sink their teeth into a meaty story.
—Publishers Weekly (starred review)

Maguire savors every inch of his elaborate narrative, introducing tropes from Russian folktales and giving his characters plenty of play, especially the hardboiled Baba Yaga, who seems to exist outside of time (and is akin to Maguire’s other witches). The plot meanders, developing everywhere at once yet always intriguing. ... [T]here is so much in his rich and consistently surprising prose that young readers will ... enjoy the gift of his magical story.
—The Horn Book (starred review)

Set in Tsarist Russia, Gregory Maguire's suspenseful story conjures the folkloric figure Baba Yaga—a hilariously acerbic old witch—and incorporates fantastic creatures such as the Firebird, an ice-dragon and a talking cat, to create a fairytale saga that will delight and challenge its readers. ... Egg & Spoon's phrasing and vocabulary give it a classic feel that reflects its folktale roots, as does its storyteller-style narration. ... An excellent choice for younger readers who are reading at more advanced levels. Alternating and ultimately interweaving story lines add complexity to the plot, which is driven by an enticing mix of mystery, danger and magic.
—Shelf Awareness (starred review)

Although Cat and Elena’s burgeoning friendship and determination make for a heartening story, it’s Maguire’s Baba Yaga, full of irreverent anachronisms and a salty attitude, who steals the show... Maguire’s fantastical world is filled with Russian folklore and history, particularly the growing unrest that eventually led to the October Revolution, and ... the whimsical tone and lush setting are ... plenty appealing.
—Booklist

The story flows easily although it includes uncommon vocabulary and an uncommon setting. However, the characters of Russian folklore are what captivates and holds the reader; especially Baba Yaga, who is ancient, modern, and futuristic, at the same time.
—Library Media Connection

Gregory Maguire's novels have never lacked for audacity. ... Now, taking on the rich tradition of Russian folk tales, he has allowed himself even greater extravagance in "Egg & Spoon." ... Somehow, Maguire transforms the wildness of his story into a commentary on the chaos and injustice of our own world — a sort of folkloric news of the day.
—Newsday

Even minor characters have flesh and blood, and brilliant cameo moments. ... The writing, frankly, is brilliant. ... It is common enough for a novelist to be able to plot intricately. It is common, even, for novelists to write as lyrically as poets. It is rare to find both qualities in the same novelist. ... “Egg & Spoon’’ is thoughtful, engaging, and theatrical in the deepest sense. This is one of those young reader’s books that may be gifted to any ardent reader of almost any age, as long as they’re open to the possibilities of wonder.
—The Boston Globe

The author of 'Wicked' wows with a magical tale set in the Russian countryside, complete with wisecracking witch Baba Yaga, she of Slavic folklore fame.
—Scholastic Instructor

[Maguire] plays with Russian folk tales, with a delightful nod to the ever-wicked, ever-beguiling Baba Yaga. ... A somewhat imaginary Russified landscape, complete with magic matroishkas, and a healthy helping of playful language ... make the story here a delight.
—Globe + Mail

Maguire weaves themes of class struggle and environmental upheaval into an engaging and relatable tale. This isn’t a story about desolation, but one of hope. Elena and Ekaterina prove that with a little tenacity and bravery, people can change their lives for the better.
—BookPage

This historical fantasy is as big as Mother Russia. ... A grandly sardonic masterpiece.
—San Francisco Chronicle

Maguire conjures up one sumptuous image after another... A novel as intricately and colorfully detailed as Cat's Faberge egg.
—The Columbus Dispatch

So much swirls through this blizzard of a novel that it's easy to get (delightfully) lost in it. ... The adventure dashes along so compelling on its chicken legs (like Baba Yaga's enchanted house) that it's more than worth a read.
—Virginian-Pilot

The story ... [is] richly told [and] contains important lessons about wealth and inequality. ... Part fantasy, part fairy tale, part adventure, this is a children's tale also directed at grown ups — or one perhaps best enjoyed together.
—Plain Dealer

An exciting nesting doll of a novel, entertaining and rich, steeped in Russian folklore. ... Fantastic, detailed and lush, like an exquisite lacquer box.
—Star Tribune

A rich and layered story, full of gorgeous images and sentences, a matryoshka doll sort of tale. ... This fabulous witch of Russian folklore is a fabulously written character, funny, scary, wry, and just about everything possible in Maguire’s capable hands. ... The plot is unique and complex, swirling around in highly unusual directions. It is staying with me and the more I mull it over the more I love it. ... A unique and wonderful read.
—Monica Edinger, Educating Alice blog

A lush and literary tale.
—Bulletin of the Center for Children's Books

A great, long, lose-yourself-in-it story sparkling with the magic of Russian folklore. ... Witty and thorough in its imagining.
—Toronto Star