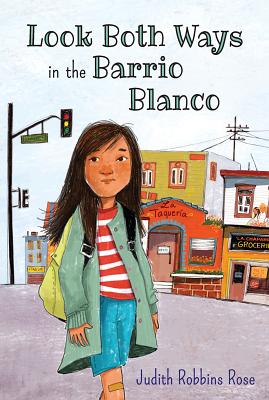 Look Both Ways in the Barrio Blanco

With humor and sensitivity, a debut novelist explores the coming of age of a girl caught between two cultures as she finds the courage to forge a new destiny.

“Miss, will you be my Amiga?”
Amiga means "friend" in Spanish, but at the youth center, it meant a lady to take you places.
I never asked myself if two people as different as Miss and me could ever really be amigas.

When Jacinta Juarez is paired with a rich, famous mentor, she is swept away from the diapers and dishes of her own daily life into a world of new experiences. But crossing la linea into Miss’s world is scary. Half of Jacinta aches for the comfort of Mamá and the familiar safety of the barrio, while the other half longs to embrace a future that offers more than cleaning stuff for white people. When her family is torn apart, Jacinta needs to bring the two halves of herself together to win back everything she's lost. Can she channel the power she’s gained from her mentor and the strength she’s inherited from Mamá to save her shattered home life?

Praise For Look Both Ways in the Barrio Blanco…

Rose presents characters in crisis, whose stories are personal, rather than broadly representative, and the book is better for it. Ultimately, this is a story about code switching, and about the different skill sets and assumptions required for complex cross-cultural and cross-class situations. An interesting first novel that treats its complex characters with unusual dignity.
—School Library Journal

Rose convincingly depicts Jacinta’s struggles as she explores aspects of upper-middle-class culture—French and gymnastics lessons, theater and ballet performances—while coping with the instability and grimness of barrio life and desperately missing her mother...A moving portrayal of a girl’s effort to embrace both her Mexican roots and the possibilities of American life, as well as an affecting look at an important contemporary issue.
—Publishers Weekly

This smart debut is a poignant exploration of cultural variations and family ties through the eyes of a lovable and funny narrator. Timely in its look at the plight of undocumented immigrants and their American-born children, it is a story of empowerment against the shadows of life in the barrio.
—Booklist

Jacinta’s story gives readers insight into the world of immigrant families and their difficult lives: the fear of discovery, the poverty, distrust of anyone who is not Mexican.
—VOYA

I loved "Look Both Ways in the Barrio Blanco" for its passionate story telling and unflagging integrity. I kept on turning the page thinking there's no way the author can sustain the tension and feeling without resorting to cliches and sentimentality, but somehow she does.
—Chicago Tribune

Judith Robbins Rose lives in the Denver metro area, where she volunteers as a fund-raiser to develop facilities for low-income communities and serves as a mentor and tutor for at-risk youth. Look Both Ways in the Barrio Blanco is her first novel.
Loading...
or
Not Currently Available for Direct Purchase