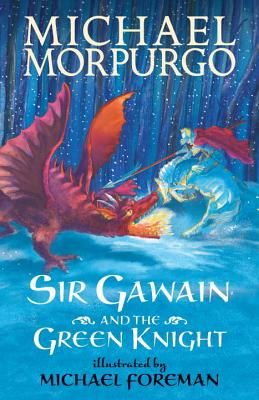 "Morpurgo's sprightly writing brings out all the humor as well as the horror of the original tale, and Foreman's profuse, evocative watercolor-and-pastel illustrations highlight the drama in each scene." — SCHOOL LIBRARY JOURNAL (starred review)

Think yourself back in years, my friends. . . .

It's New Year's Eve in Camelot, where King Arthur, Queen Guinevere, and all their good Knights wait breathlessly for an extravagant feast to begin. Suddenly, a strange and frightening Knight bursts into the hall — a giant of a man, green from head to toe, who mockingly challenges the Court to a shocking game. Only the chivalrous Sir Gawain dares to take on the hideous Green Knight. But over the unexpected course of his test,
will Gawain prove as brave and honest as he'd like to believe? Welcome to a medieval world full of sword fights and shape-shifting, monsters and magic, and timeless characters both gallant and wonderfully human. Written anonymously in the fourteenth century, Sir Gawain and the Green Knight is retold in its entirety by Michael Morpurgo in a lively and accessible narration that captures all the tale's drama and humor. Vivid illustrations by the celebrated Michael Foreman infuse this classic tale with the sights and colors of dragons, swords, and medieval pageantry.

Praise For Sir Gawain and the Green Knight…

Morpurgo's sprightly writing brings out all the humor as well as the horror of the original tale, and Foreman's profuse, evocative watercolor-and-pastel illustrations highlight the drama in each scene.
—School Library Journal (starred review)

Morpurgo's dramatic telling captures the vitality of the tale as well as its beauty and mystery. Foreman illuminates the book with watercolor-and-pastel illustrations that are true to the story, full of energy and aglow with colors.
—Booklist (starred review)

Michael Morpurgo is the author of more than ninety books, many of which have been adapted for film and television. He has won numerous prizes and awards for his work, including the Smarties Book Prize, the Writer's Guild Award, and both the Whitbread Award and Children&sup1;s Book Award for his novel THE WRECK OF THE ZANZIBAR. In 2003 he was appointed the third Children's Laureate, a position he founded with the poet Ted Hughes. He lives in Devon, England.

Michael Foreman is one of the world's leading children&sup1;s book illustrators. He has written and illustrated numerous books and has won many major awards, including the Kate Greenaway Medal, the Kurt Maschler Award, and the Bologna Graphics Prize. Among his many picture books are HELLO WORLD, A TRIP TO DINOSAUR TIME, and MICHAEL FOREMAN'S PLAYTIME RHYMES. He lives in London.
Loading...
or
Not Currently Available for Direct Purchase