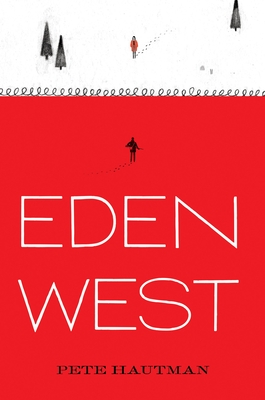 Twelve square miles of paradise, surrounded by an eight-foot-high chain-link fence: this is Nodd, the land of the Grace. It is all seventeen-year-old Jacob knows. Beyond the fence lies the World, a wicked, terrible place, doomed to destruction. When the Archangel Zerachiel descends from Heaven, only the Grace will be spared the horrors of the Apocalypse. But something is rotten in paradise. A wolf invades Nodd, slaughtering the Grace’s sheep. A new boy arrives from outside, and his scorn and disdain threaten to tarnish Jacob’s contentment. Then, while patrolling the borders of Nodd, Jacob meets Lynna, a girl from the adjoining ranch, who tempts him to sample the forbidden Worldly pleasures that lie beyond the fence. Jacob’s faith, his devotion, and his grip on reality are tested as his feelings for Lynna blossom into something greater and the End Days grow ever closer. Eden West is the story of two worlds, two hearts, the power of faith, and the resilience of the human spirit.

Hautman delivers a captivating character study, studiously demonstrating the reasons why some people are drawn into cults and quietly revealing how unquestioned power turns rotten. Jacob is a realistic and relatable protagonist and his complex relationships with those around him—and himself—ring true. Eden West is both quiet and loud, understanding and judging, and absolutely engrossing. Readers will be quick to judge the Grace but may find themselves looking inward to their own beliefs as they move through the story.... A heartbreaking, uplifting, and fantastic read.
—School Library Journal (starred review)

While projecting a unique and expressive voice in Jacob, Hautman sensitively and gracefully explores powerful ideas about faith and church communities, keeping a deft balance between criticism of religious fervor and deep respect for faith and belief. Thought-provoking and quietly captivating.
—Booklist (starred review)

In this novel that cuts to the core of adolescence, Hautman walks the line between those of pure faith and those who stray, creating full-blooded characters who feel real and flawed. Jacob must sort out his own relationship with the God of his understanding—no one can teach him what that looks like.
—Shelf Awareness (starred review)

Hautman captures the cultish mind-set easily while showing just how fragile its foundation can be.
—Publishers Weekly

Pete Hautman is not afraid to tangle with religion and faith at a personal, thoughtful, and vital level. This book travels some rough country, but it crosses it with respect.
—Blythe Woolston, author of "Black Helicopters" and "The Freak Observer"

Jacob, genuinely torn between his faith and his desires, is a compelling character, and his experience will resonate with readers...Readers who appreciate novels with a sturdy amount of moral ambiguity will find much to mull in this one.
—Bulletin of the Center for Children's Books

Hautman is an excellent writer, so it is no surprise his newest book is easy to get into and grips readers from start to finish.
—VOYA

Hautman’s portrayal of Jacob’s emotional turmoil is hauntingly believable, and the story’s examination of religious faith and fervor is wholly absorbing.
—The Horn Book

Pete Hautman is the author of many books for young adults and adults, including the National Book Award–winning Godless and the recent Klaatu Diskos trilogy. He splits his time between Wisconsin and Minnesota.
Loading...
or
Not Currently Available for Direct Purchase