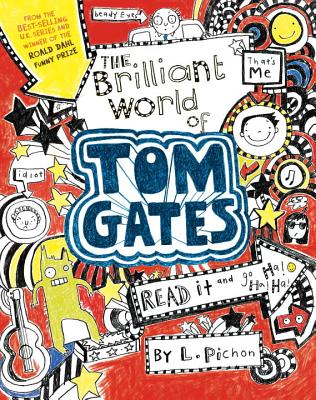 The Brilliant World of Tom Gates

Meet Tom Gates. When his teachers don’t have their beady eyes on him, he likes to draw pictures and write about stuff, like last summer’s worst camping vacation ever (five merits!), or how much he hates sitting next to nosy Marcus Meldrew, the most annoying boy at school. All Tom really wants is to score tickets to see the best band ever, Dude3, when they come to town, and to impress Amy Porter, who is very nice and smart (but is currently ignoring him). Tom’s teachers think he is easily distracted and “lacks focus,” but that’s a bit harsh — can he help it if his grumpy big sister, Delia, made him late for school (again), or that last night’s homework had to be sacrificed to stave off a vicious dog attack? Master of excuses, creative storyteller, and middle-school comedian extraordinaire, Tom Gates is guaranteed to get kids turning the pages — and keep them laughing.

Praise For The Brilliant World of Tom Gates…

The diary-style, comic novel gets a UK makeover with this look at Tom Gates’ fifth-grade year, documenting with hilarious detail every mishap (like forgetting about class-picture day) and success (like hiding his older sister’s sunglasses in some bagged salad). The handwritten font and cartoon drawings bring Tom’s experiences to life, making his struggles and dreams immensely relatable. ... Tom’s upbeat outlook and everyday trials will have readers laughing out loud and eager for this series’ next installment.
—Booklist Online

How Tom makes peace with his teacher, Marcus Meldrow, and his sister and still gets to go to the Dude 3 concert will keep readers chuckling. Readers of Wimpy Kid books will love this series with a UK twist written by an award-winning British author.
—Library Media Connection

Will be enjoyed by those who can’t get enough of Jeff Kinney’s “Diary of a Wimpy Kid” books. The engaging illustrations are plentiful and will delight avid and reluctant readers alike.
—School Library Journal

Tom Gates can easily be seen as a British cousin to Jeff Kinney’s Greg Heffley. ... The book is typeset in a handwritten-looking font, accompanied by Tom’s doodles and text that he’s embellished for emphasis. ... [R]eaders who like their fiction heavily illustrated and their heroes mischievous should find it diverting.
—Publishers Weekly

We like Tom and the exuberant way he illustrates his account of himself with little drawings and embellishments, and we sympathize with his efforts to conjure a dynamic logo for DogZombies, the band he has formed with his friend Derek. ... Life occasionally doles out difficulty to Tom Gates. ... Our hero may be mortified, but readers ages 9 to 12 won't mind a bit.
—The Wall Street Journal

L. Pichon says that when she was little, she loved to draw, and her mom said she was very good at making a mess (this is still true today). She kept drawing, went to art school, became a designer and art director at Jive Records, and began to publish children’s books. After its publication in the U.K., The Brilliant World of Tom Gates won several prestigious awards, including the Roald Dahl Funny Prize, the Waterstone’s Children’s Book Prize, and the Blue Peter Book Award. L. Pichon lives in Brighton, England, with her family.
Loading...
or support indie stores by buying on
(This book is on backorder)