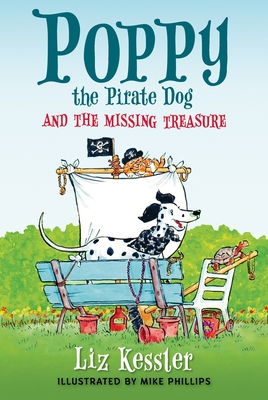 Poppy the Pirate Dog and the Missing Treasure

Poppy the Pirate Dog is in charge of keeping the treasure safe, so what happens when some jewelry goes missing?

It’s Mom’s birthday, so Tim and Suzy are planning a special pirate show for her. Poppy’s job is to guard the treasure, but while on duty, she hurts her eye and has to go to the vet. Worse yet, she comes home not with a pirate eye patch, but with a big plastic cone around her neck! While the rest of the family searches for Dad’s missing present—a sparkly necklace for Mom—Poppy sulks alone outside. But then Poppy catches sight of something twinkling in the grass. Is this her chance to redeem herself as the best pirate dog ever? This third early reader from Liz Kessler sparkles with warmth, humor, and a dash of pirate gold.

Praise For Poppy the Pirate Dog and the Missing Treasure…

Poppy and her endearing family provide a bounty of fun in this latest beginning chapter book.
—School Library Journal

Well designed for young readers...The third book in the Poppy the Pirate Dog series features the same lovable but amusing protagonist, whose down-to-earth adventures are magnified by her imagination.
—Booklist Online

Liz Kessler is the author of the first two books about Poppy the Pirate Dog, as well as the best-selling middle-grade series about half-mermaid Emily Windsnap, the Philippa Fisher series, and the novels A Year Without Autumn, North of Nowhere, and Has Anyone Seen Jessica Jenkins? The Poppy stories are inspired by the adventures of her own dog—named Poppy, of course! Liz Kessler lives in England.

Mike Phillips has been illustrating children’s books, from picture books for the very young to the gruesome Horrible Histories by Terry Deary, for almost twenty years. He lives in a small fishing village in England with his family and thinks his own dog, who is named Poppy—believe it or not!—may also want to be a pirate.
Loading...
or
Not Currently Available for Direct Purchase