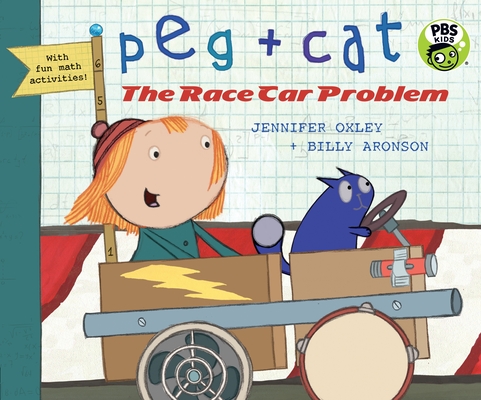 Peg and Cat, stars of their own Emmy Award–winning animated TV series, zoom into a picture book and put math skills to the test in a lively racing adventure.

Peg and Cat have built an amazing car out of things they found lying around. They’ve named her Hot Buttered Lightning (since she’s built for speed), and they plan to win the Tallapegga Twenty. If they can make it out of the junkyard, that is. It’s a good thing Peg knows the best shape to use to make wheels and how to count laps to see who is ahead. And it’s lucky that Cat reminds Peg to keep calm when she’stotally freaking out! Will Peg and Cat be the first to complete twenty laps and win the Golden Cup? Or will it be one of their quirky competitors? Count on Peg and Cat to rev up young problem-solvers for an exciting race to the finish.

Libraries that collect titles related to children’s television programs will surely want this title in their collections.
—School Library Journal

Peg + Cat is the Emmy Award–winning animated TV series created by Jennifer Oxley and Billy Aronson and produced by the Fred Rogers Company.
Loading...
or support indie stores by buying on