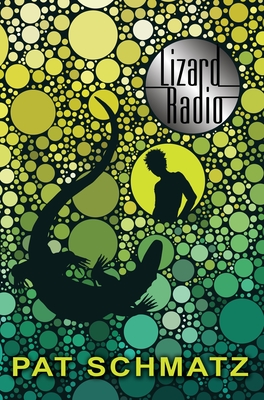 In a futuristic society run by an all-powerful Gov, a bender teen on the cusp of adulthood has choices to make that will change her life—and maybe the world.

Fifteen-year-old bender Kivali has had a rough time in a gender-rigid culture. Abandoned as a baby and raised by Sheila, an ardent nonconformist, Kivali has always been surrounded by uncertainty. Where did she come from? Is it true what Sheila says, that she was deposited on Earth by the mysterious saurians? What are you? people ask, and Kivali isn’t sure. Boy/girl? Human/lizard? Both/neither? Now she’s in CropCamp, with all of its schedules and regs, and the first real friends she’s ever had. Strange occurrences and complicated relationships raise questions Kivali has never before had to consider. But she has a gift—the power to enter a trancelike state to harness the “knowings” inside her. She has Lizard Radio. Will it be enough to save her? A coming-of-age story rich in friendships and the shattering emotions of first love, this deeply felt novel will resonate with teens just emerging as adults in a sometimes hostile world.

The themes in Schmatz’s novel surpass in complexity many of its contenders in YA dystopian fiction. The author’s storytelling unravels question upon question for readers, not only about Kavali but also about the power of free will. An entertaining and thought-provoking read, this title will be a big hit for those who want a little something more from their dystopian fiction.
—School Library Journal (starred review)

Sophisticated, character-driven science fiction, as notable for its genderqueer protagonist as for its intricate, suspenseful plot.
—Kirkus Reviews (starred review)

Schmatz conjures up sympathetic characters and an intriguing premise...a thoughtful and intriguing look at the teenage search for identity.
—Publishers Weekly

Schmatz paints a beautiful story with the use of amazingly diverse and well-developed characters. Kivali’s struggle to find where she belongs is highly relatable to a variety of readers, especially those who struggle with their own gender identity as Kivali does...Any person who has trouble fitting in will greatly enjoy this book.
—VOYA

In a sea of post-apocalyptic and dystopian young adult novels with female heroes, Lizard Radio stands out. Unusual, mildly magical, and well paced, Kivali’s quest to dismantle the system manages to be unique yet relatable. The distinct dystopian world, the genderbending protagonist, and the socially conscious writing provoke questions about Kivali’s (and the reader’s) reality.
—The Horn Book

...there are rewarding revelations rooted in character development.
—Booklist

Lizard as a character is endearing from the start, relying on a pretend Saurian identity to push the idea that she doesn’t fit...Sci-fi buffs who love character-driven novels and teens on the GLBTQ spectrum who are looking for a book that isn’t realistic fiction will all find much to appreciate in this clever, edgy novel.
—Bulletin of the Center for Children's Books

This work of science fiction addresses complex issues and deep questions, and would be an outstanding addition for all library collections.
—School Library Connection

Pat Schmatz is the author of the critically acclaimed Bluefish. About Lizard Radio, she says, “I keep a notepad with sketches and ideas, and one day a lonely lizard wearing headphones came out of my pencil. The young lizard was desperate to pick up a signal, and from that moment on, so was I. When I tuned in, I found this story.” Pat Schmatz lives in Wisconsin.
Loading...
or support indie stores by buying on