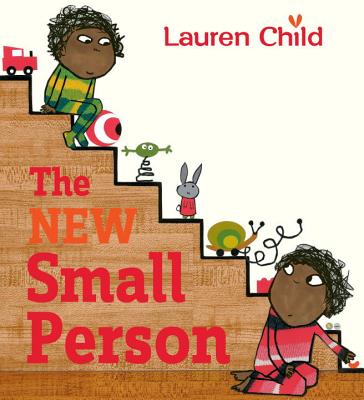 Lauren Child tells the familiar tale of a less-than-welcome sibling with subtlety, insight, affection, and humor.

Elmore Green starts life as an only child, as many children do. He has a room to himself, where he can line up his precious things and nobody will move them one inch. But one day everything changes. When the new small person comes along, it seems that everybody might like it a bit more than they like Elmore Green. And when the small person knocks over Elmore’s things and even licks his jelly-bean collection, Elmore’s parents say that he can’t be angry because the small person is only small. Elmore wants the small person to go back to wherever it came from. Then, one night, everything changes. . . . In her signature visual style, Lauren Child gets to the heart of a child’s evolving emotions about becoming a big brother or sister.

Praise For The New Small Person…

Child has a knack for homing in on the important truths of kid experiences in entertaining ways, demonstrated here in the dynamics between Elmore and Albert and in the precise and pithy phrasing of Elmore’s observations. Elmore’s experiences will certainly resonate with older siblings, while younger ones may gain a bit of insight into their older sibs’ perspective.... Pair this Jenkins’ That New Animal (BCCB 3/05) for a look at the ways in which younger siblings change everything.
—Bulletin of the Center for Children’s Books (starred review)

A familiar theme—a big brother feels displaced by a new baby—seems fresh in Child's latest. ... It's a pleasing twist on typical stories about sibling rivalry, in that the little brother's actions change the dynamic rather than vice versa. Shared activities and playthings strengthen their bond, resulting in a happy ending for Elmore and Albert, whose name is finally revealed upon his big brother's change of heart. How nice to see a familiar story made new with a family of color and a little brother as hero.
—Kirkus Reviews (starred review)

Fresh and amusing.... With expressive illustrations and a story that speaks directly to children, this picture book is beautifully crafted for reading aloud.
—Booklist (starred review)

Child is as funny and astute as ever, and it's refreshing to see a black family depicted in her stylish mixed-media art.
—The New York Times

What firstborn doesn’t revel in being thought of by his parents as “simply the funniest, cleverest, most ADORABLE person they had ever seen”? ... Child is no stranger to fraught sibling dynamics, and her trademark mixed-media collages—textured, fragmented, always with a kid’s-eye view—sympathetically reflect the experiences of a no-longer-only child.
—The Horn Book

The selling point is the way Child frames Elmore’s growing love for his brother as the active, incremental discovery of the joy of companionship (“It was nice to have someone there in the dark when the scaries were around”), rather than treacly submission to the inevitable.
—Publishers Weekly

The childlike perspective and simple illustrations will make this story a favorite for any kid who has ever been faced with a new sibling or has ha d to learn to share. Preschoolers will enjoy hearing this story, while independent readers will love the big print and colorful, cartoon illustrations.
—School Library Journal

The common frustration of having a perfectly nice childhood ruined by an interloper—in the form of a baby brother or sister—gets a stylish reinterpretation at the hands of writer and illustrator Lauren Child in “The New Small Person." ... Here, in an atmosphere of humor and tenderness, we naturally sympathize with Elmore Green.
—The Wall Street Journal

The New Small Person is a delightful tale of new sibling arrival and acceptance, another wonderful offering from the masterful Child.
—BookPage

The playful illustrations, clever text design and placement, and carefully paced plot all help to convey Albert’s experience of embracing the expansion of his family.
—Literacy Daily

A fine story of sibling interactions and the move from only child to sibling invites young picture book readers to understand the presence of a younger child in the family.
—Children's Bookwatch

Lauren Child has published many best-selling and award-winning books, including the hugely popular Charlie and Lola and Clarice Bean series and a spin-off series of novels about Ruby Redfort. She has won numerous awards, including the prestigious Kate Greenaway Medal. Lauren Child lives in London.
Loading...
or
Not Currently Available for Direct Purchase