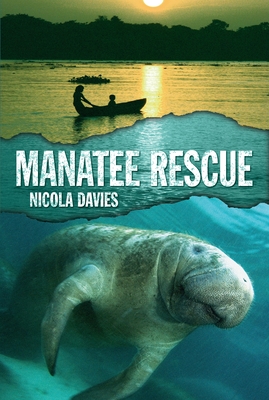 Zoologist Nicola Davies merges a heart-pounding adventure with a conservation message triggered by a life-changing—and mind-changing—encounter.

Manuela had imagined that killing a manatee would be like killing a very big fish, just more exciting. But when her father successfully harpoons one, leaving its baby orphaned, she finds that her feelings have changed. She vows to rescue the baby manatee and return it to the river. But she soon realizes what an enormous task she’s taken on. Will she be able to save the baby manatee—and protect him from being hunted in the future, too?

Nicola Davies is a zoologist and the award-winning author of many books for children, including Surprising Sharks, which was a Boston Globe–Horn Book Honor winner, and The Lion Who Stole My Arm, also illustrated by Annabel Wright. Nicola Davies lives in Wales.

Annabel Wright’s work has been used in campaigns for Amnesty International and the School of Visual Arts in New York and has also appeared in newspapers and magazines such as the Economist and the Financial Times. She lives in Scotland.

Praise For Manatee Rescue (Heroes of the Wild)…

This is a good addition to chapter book collections and will be valuable for understanding animal conservation, familiarizing students with Amazonian cultures, and encouraging grassroots activism for tenacious kids.
—School Library Journal

...This appealing animal-survival adventure is based on a true episode described in an afterword.
—Kirkus Reviews

Young readers will be inspired by this tale, which is based on a true story, and will identify with the characters’ fight for animal conservation.
—Booklist
or support indie stores by buying on
Copyright © 2020 American Booksellers Association