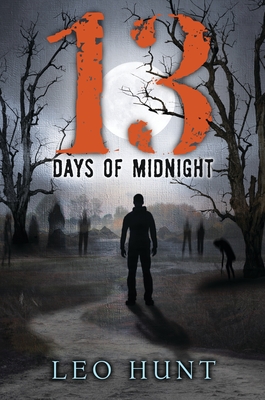 In a devilishly dark and funny debut, a teen finds himself the unwitting beneficiary of eight enslaved and angry ghosts seeking bloody vengeance.

When Luke Manchett’s estranged father dies unexpectedly, he leaves his son a dark inheritance: a collection of eight restless spirits, known as his Host, who want revenge for their long enslavement. Once they figure out that Luke has no clue how to manage them, they become increasingly belligerent, and eventually mutiny. Halloween (the night when ghosts reach the height of their power) is fast approaching, and Luke knows his Host is planning something far more trick than treat. Armed with only his father’s indecipherable notes, a locked copy of The Book of Eight, and help from school outcast Elza Moss, Luke has just thirteen days to uncover the closely guarded secrets of black magic and send his unquiet spirits to their eternal rest—or join their ghostly ranks himself.

Praise For Thirteen Days of Midnight…

A well-constructed, truly unique plot and perfect pacing combine to immediately hook readers, who will be invested in Luke’s fate after only a few pages. Luke and Elza are credible and convincing characters: He is funny, likable, and though inexperienced with the paranormal, he is determined. Independent and outspoken Elza shows a spark of her own humor...Fans of Jonathan Stroud’s “Lockwood & Co.” series are certain to appreciate this unusual and enjoyable title.
—School Library Journal (starred review)

With well-drawn characters, some truly creepy ghouls, and entertaining banter, this is a self-assured debut that’s as funny as it is terrifying.
—Publishers Weekly (starred review)

Hunt keeps tension high but balances it with humor, including a wonderful short episode written from a dog's point of view. The northern English setting adds atmosphere, and Luke's narration is both disarming and amusing. A sprightly, original story with good twists.
—Kirkus Reviews

Hunt builds suspense as the days to Halloween melt away and creates a sharp contrast between the mundane details of Luke’s pedestrian school life with the fresh horror he sees as the veil between the living and the dead grows ever thinner. A solid pick for paranormal enthusiasts.
—Booklist Online

The frequent dark humor of Luke’s narration is balanced by moments of true suspense and satisfyingly complex relationships between Luke and his parents, Elza, the Host, and even his dog (whose touching perspective is revealed in an unexpected way).
—The Horn Book

Offer this to ghost fans who don’t mind some serious creepiness and a sturdy amount of gore mixed in with their spectral hauntings.
—Bulletin of the Center for Children's Books

Leo Hunt wrote Thirteen Days of Midnight in his first year of college and signed with an agent the following year. When he was younger he thought he wanted to be either an archaeologist or an author; but when he learned that archaeologists didn't unearth piles of perfectly preserved dinosaur bones every time they put a spade in the ground, he decided to write books instead. He lives in northeast England.
Loading...
or
Not Currently Available for Direct Purchase