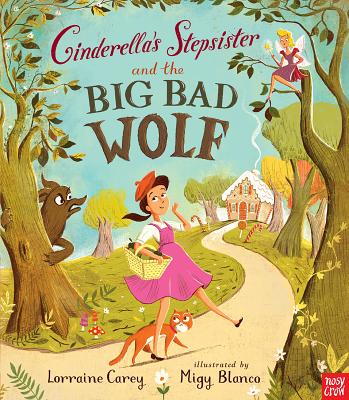 So, you think you know the story of Cinderella? Well, you'd better think again because in this hilarious tale, nothing is what it seems. Did you know that Cinderella wasn't actually very nice? And that there were three Ugly stepsisters? And that the youngest sister, Gertie, was absolutely the nicest person you could ever hope to meet? But she’ll have to act mean and bad like the rest of her family if she wants to go to the ball. With the help of some favorite fairy-tale characters, can she learn how to fit in with her family in time?

Lorraine Carey spent her early years digging for fairies in her backyard and hoping upon hope that she'd wake up on Christmas morning to find a horse behind the couch. Lorraine Carey now lives in London with her son, Kassius; their cat, Merlin; and an amazingly invincible fish named Bob.

Migy Blanco was born in Salford, England, studied in London, and then spent ten years working in advertising and editorial illustration. After marrying, he moved to Buenos Aires, where he developed a children’s-book style that is bold, magical, and eye-catching. Migy Blanco recently moved back to the U.K. and, for the first time in his life, is living outside of a mega-city, enjoying nature and exploring new sources of inspiration.

Praise For Cinderella's Stepsister and the Big Bad Wolf…

This amusing fairy tale mashup reveals that one of Cinderella’s stepsisters, Gertie, was actually the kind, helpful one...Blanco’s digital illustrations set the story in what appears to be 1930s England while infusing Gertie’s quest with a gentle humor to match Carey’s narration.
—Publishers Weekly

With rich, digitally created illustrations, simple and succinct text, and familiar characters, this picture book is sure to be a hit and make a great read-aloud for early elementary students.
—School Library Connection
or
Buy Here
Copyright © 2020 American Booksellers Association