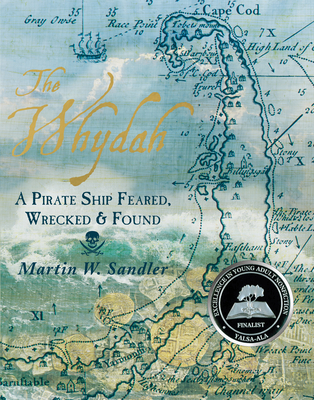 Fast-paced, thorough, and fascinating, this choice is certain to especially hold the interest of any pirate lover and treasure hunter.
—Reading Eagle (from Kendal Rautzhan's "Books to Borrow")

Martin W. Sandler has written more than seventy books for children and adults, including Iron Rails, Iron Men, and the Race to Link the Nation: The Story of the Transcontinental Railroad and The Impossible Rescue: The True Story of an Amazing Arctic Adventure. Martin W. Sandler lives with his wife on Cape Cod.

1. What realities of life onboard a pirate ship surprised you the most? Did anything you learned in the book shock you?

2. Compare the life of a pirate as described in The Whydah to pirates in movies, television shows, or other books. What are the most obvious differences between fictional pirates and what we know to be historically true?

3. If Maria Hallett really did exist and had a relationship with Sam Bellamy, how does that change history’s perception of Black Sam? How does the story of him as a young man in love change your perception of him?

4. How did the pirates’ Articles of Agreement both contradict and enforce public view of pirates? What do the Articles reveal about law and justice even in an industry as disreputable as piracy?

5. Did any of the Articles of Agreement surprise or amuse you? If you lived under them, how would you feel about each one in turn?

6. Considering the poverty and scant farming, what do you think of the Cape Codders’ attitudes towards shipwrecks?

7. Was any one person or circumstance — the storm, Sam Bellamy, the captain who lied about knowing the coast, Montgomery — to blame for the wreck of the Whydah?

8. What traits would you consider necessary in treasure seekers and marine archaeologists hoping to uncover long-lost wrecks and artifacts?

9. Imagine tracking the news of Barry Clifford’s excavation as it unfolded. Would you have believed right away, as he did, that he’d found the spot where the Whydah was wrecked? If not, which discovery would have convinced you: the cannons? The gold and silver? Or would you have waited until the bell was uncovered to admit Clifford found what he’d been looking for?

10. Which uncovered artifact from the Whydah is most exciting to you? Why?