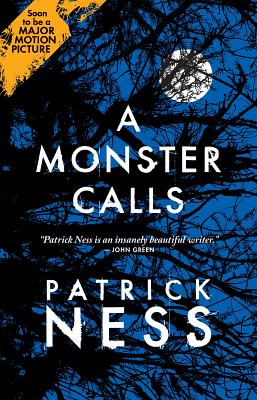 A new non-illustrated edition of Patrick Ness’s Carnegie Medal winner—featuring an atmospheric cover by Jim Kay with an announcement of the upcoming film adaptation.

The monster in Conor’s backyard is not the one he’s been expecting — the one from the nightmare he’s had every night since his mother started her treatments. This monster is ancient. And wild. And it wants something from Conor. It wants the truth.

From the final idea of award-winning author Siobhan Dowd—whose premature death from cancer prevented her from writing it herself—Patrick Ness has spun a haunting and darkly funny novel of mischief, loss, and monsters both real and imagined. The multi-award-winning story is soon to be a major motion picture starring Liam Neeson, Felicity Jones, and Sigourney Weaver.

Jim Kay studied illustration and worked in the archives of the Tate Gallery and the Kew Royal Botanic Gardens, two experiences that heavily influence his work. His images for A MONSTER CALLS use everything from beetles to breadboards to create interesting marks and textures. Jim Kay lives in Edinburgh, Scotland.
Loading...
or
Not Currently Available for Direct Purchase