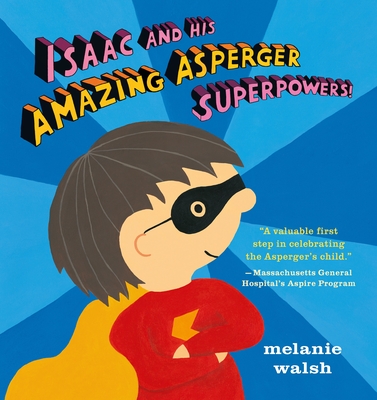 Isaac and His Amazing Asperger Superpowers!

Isaac may look like everyone else, but he actually has superpowers that make him different from his brother and his classmates. Some kids don’t understand that and call him names. But Isaac’s superhero brain remembers loads of things, he has energy enough to bounce on his trampoline for hours, and his ears are so sharp he can even hear the buzzing some lights make in school (ouch!). He tends to say whatever comes into his head and doesn’t realize that he might hurt someone’s feelings — by telling them they have big teeth, for example! Even though he’s not really a superhero — he has Asperger syndrome, which means his brain works a little differently — he does love to play superheroes with his brother, who understands him. Straightforward and engaging, Isaac’s first-person narrative will help kids see the world through the eyes of a child with the high-cognitive type of autism spectrum disorder commonly known as Asperger syndrome.

Praise For Isaac and His Amazing Asperger Superpowers!…

This picture book is an affirming mirror for children with Asperger’s and an empathetic window for those who don’t but should understand why other kids are sometimes different. Told in the first person from Isaac’s perspective, the narrative is appropriately direct, utilizing clear, no-frills sentences: “Because I’m a superhero, I have lots of things to think about.” Similarly, the illustrations are simple in form and color, depicting smiling faces and only the most essential details. The effect is informative and endearing.
—Booklist Online

Walsh’s sweet and significant picture book depicts Asperger’s syndrome as a superpower that makes its protagonist, a young boy named Isaac, different than his peers...images, along with the kid-friendly superhero theme, work together to craft a story that is informative and engaging. A helpful list of links about Asperger’s and autism spectrum disorder directed at educators is appended. A very effective way to build awareness of and sensitivity toward children with Asperger’s syndrome
—School Library Journal

Melanie Walsh is the author-illustrator of Living with Mom and Living with Dad, 10 Things I Can Do to Help My World, and many other books for children. She lives in England.
Loading...
or support indie stores by buying on