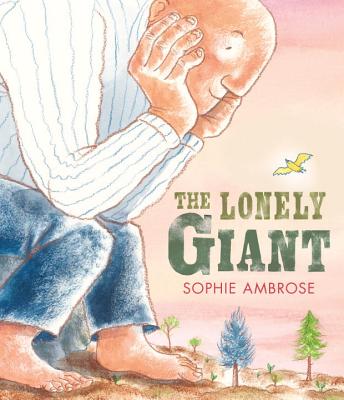 After inadvertently destroying his home, a well-meaning giant must learn the true value of the natural world.

In the middle of a vast forest lives a giant who spends his days hurling and heaving, smashing and bashing. Over time, the animals flee as their homes vanish, the birdsong dwindles away to silence, and, finally, the forest itself disappears. Now the lonely giant misses the crackling warmth of a fire and the sweet songs of the yellow bird — but will he realize it’s up to him to restore what he loves? Sophie Ambrose debuts with a beautifully illustrated modern fable offering a poignant environmental twist.

Praise For The Lonely Giant…

Charmingly illustrated in acrylic, watercolor, and colored pencil, Ambrose's ecological fable speaks to the value of friendship as well. Adult readers won't have much trouble seeing the parable, and child readers, though they may not grasp the nuances, will get the message as well. Sweet and effective.
—Kirkus Reviews

The allegory of ecological ruin won’t be lost on children, and the scenes of the restored forest give the story hope. It places the blame for environmental destruction not on evildoers, but on thoughtless but basically good people who weren’t really thinking as they smashed and mashed.
—Publishers Weekly

Pleasant, to the point, and an easy way to get a conversation about some of life’s issues underway.
—Booklist

The acrylic, watercolor, and colored pencil illustrations, which show how the giant uses his strength in a positive way to help others, reinforce the idea that when we are not aware of what we are doing, the consequences can be long-lasting. It’s wonderful to see the friendlier side of a giant character. A fun addition.
—School Library Journal

This simple allegory of humanity’s relationship with nature would tie in nicely to Earth Day or any green initiatives.
—School Library Connection

British author-illustrator Sophie Ambrose's lovely debut provides gentle lessons on friendship, freedom and a human's relationship with the natural world. Her tremendously appealing acrylic, watercolor and colored pencil illustrations capture the ingenuous violence of a giant who knows no other way to live.
—Shelf Awareness for Readers

A giant living in a bustling forest goes about doing what giants are unfortunately prone to do — ripping up trees… His destructiveness is not the result of villainy but of a lack of awareness, and he’s saved by a little bird who loves him rather than scolds him. Useful stuff, this.
—USA Today

A wonderful story with expressive illustrations, The Lonely Giant is a tale that conveys the importance of caring for the earth and for one another.
—Reading Eagle (from Kendal Rautzhan's "Books to Borrow")

Sophie Ambrose has a BA in illustration from Kingston University in England. The Lonely Giant is her first picture book. She lives in London.
Loading...
or
Not Currently Available for Direct Purchase