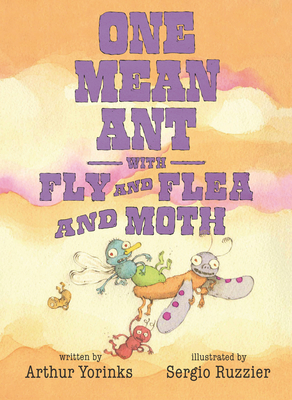 One Mean Ant with Fly and Flea and Moth

Well, here they are again. The ant, the fly, and the flea. Stuck doing tricks for the circus-goers every night and twice on Sundays. Stuck like a . . . well, you know. But with the help of Moth, a fellow performer with a pretty spectacular trick, the four plan their escape. Will it work? Can you teach an old moth not to fly into a light bulb? In a third tale buzzing with wordplay and wacky-eyed insects, acclaimed playwright and author Arthur Yorinks, together with award-winning illustrator Sergio Ruzzier, presents a hilarious (and unexpectedly heartfelt) finale to the series about the meanest ant ever and his buggy “friends.”

Praise For One Mean Ant with Fly and Flea and Moth…

This book closes out a picture book trilogy that’s partly about the value of having friends but mostly about silly wordplay and Abbott and Costello style repartee. . . . An optionally standalone episode, with enough verbal foolery and exaggerated emotion to keep everyone amused.
—School Library Journal

There is much humor in Ruzzier’s depictions of these googly-eyed characters. . . A satisfying end to an entertaining series.
—Kirkus Reviews

Arthur Yorinks is a playwright, director, and author of more than thirty-five picture books for children, including the Caldecott Medal winner Hey, Al, illustrated by Richard Egielski, with whom he has collaborated on numerous award-winning titles. He also wrote One Mean Ant and One Mean Ant with Fly and Flea, both illustrated by Sergio Ruzzier. Arthur Yorinks lives in Cambridge, New York.

Sergio Ruzzier was a 2011 Maurice Sendak Fellow. His books have received many awards, including Parents’ Choice Gold Awards for This Is Not a Picture Book! and The Room of Wonders. He is also the illustrator of One Mean Ant and One Mean Ant with Fly and Flea. He splits his time between New York and the northern Italian hills.
Loading...
or support indie stores by buying on