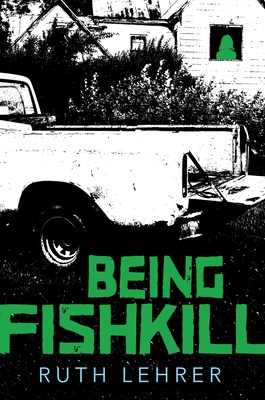 Fishkill Carmel fends for herself, with her fists if need be — until a thwarted lunch theft introduces her to strange, sunny Duck-Duck and a chance for a new start.

Born in the backseat of a moving car, Carmel Fishkill was unceremoniously pushed into a world that refuses to offer her security, stability, love. At age thirteen, she begins to fight back. Carmel Fishkill becomes Fishkill Carmel, who deflects her tormenters with a strong left hook and conceals her secrets from teachers and social workers. But Fishkill’s fierce defenses falter when she meets eccentric optimist Duck-Duck Farina, and soon they, along with Duck-Duck’s mother, Molly, form a tentative family, even as Fishkill struggles to understand her place in it. This fragile new beginning is threatened by the reappearance of Fishkill’s unstable mother — and by unfathomable tragedy. Poet Ruth Lehrer’s young adult debut is a stunning, revelatory look at what defines and sustains “family.” And, just as it does for Fishkill, meeting Duck-Duck Farina and her mother will leave readers forever changed.

Praise For Being Fishkill…

A desperately sad story of profound abuse is softened somewhat by the highly intelligent Duck-Duck and her loving mother. But neither love nor grief is linear. Fishkill's guilt, anger, and abandonment only intensify as the story unfolds, leaving her desperate and unsure where to turn...Abuse is eclipsed by love in this moving novel.
—Kirkus Reviews

Lehrer pulls at heartstrings in her thought-provoking debut...a complex and well-plotted work.
—Booklist

In Lehrer’s engrossing first novel, 12-year-old Carmel Fishkill (named after a highway exit sign her mother, Keely, glimpsed while giving birth in the back seat of a car) decides that starting seventh grade in a new school is an opportunity to toughen up her image...The plot, as well as Duck-Duck and Fishkill’s friendship, twists and turns as Keely reappears and disappears, until a tragic development changes the entire tone of the book, providing a bittersweet resolution.
—Publishers Weekly

Lehrer’s debut is well written and touches upon tough subjects such as bullying, abuse, and teen pregnancy in a lyrical but age-appropriate way. Fishkill lives a hard life, but the book speaks to how schools and institutions handle students in poverty. A great purchase for public libraries.
—School Library Journal

The deep sadness undergirding this story is held in check, rhetorically speaking, by Fishkill’s matter-of-fact, survivalist perspective and a fast-moving plot...Fans of Catherine Ryan Hyde’s rescue dramas are the audience for this.
—Bulletin of the Center for Children's Books

In the year’s most heartwarming, heartbreaking teen novel, Carmel Fishkill – who’s been abused for years – decides to reinvent herself and change her name to Fishkill Carmel. After she finally finds some solace, her unstable mother reappears.
—Entertainment Weekly

Ruth Lehrer is a poet, author, and American Sign Language interpreter. She lives in the woods of western Massachusetts.
Loading...
or
Not Currently Available for Direct Purchase